PRIME Minister Phillip “Brave” Davis.
As of Friday, January 20, 2023
By LEANDRA ROLLE
Tribune Staff Reporter
lrolle@tribunemedia.net
DESPITE some critics saying the government is not doing enough to clamp down on illegal immigration, Prime Minister Phillip “Brave” Davis insisted yesterday that his administration is addressing the problem.
“We are addressing it. We are addressing the issues that impact (us),” he told reporters after addressing the 32nd Annual Bahamas Business Outlook at Baha Mar yesterday.
“This is not a new issue. This is an issue that’s been with us from pre-emancipation. If you check your historical facts, you’ll know that this issue of migration in The Bahamas as it relates to our neighbours to the north and throughout the Caribbean has been with us from pre-emancipation.”
His comments come amid public outcry over what some term to be an “immigration crisis” in the country.
Last year, nearly 5,000 migrants, most of them Haitians, were repatriated from the country after entering Bahamian shores illegally.
In Parliament on Wednesday, Immigration Minister Keith Bell issued a stern warning to people living in the country illegally “to wind up” their affairs and leave immediately or face deportation.
Yesterday, Mr Davis said he supported what Mr Bell had said.
“I think he is just reiterating what the law is and that all who are here ought to be able to comply with our laws and we are a country of laws and we ask those who. . . are here to obey the laws.” 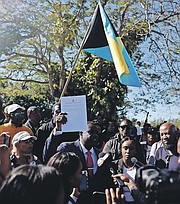 LINCOLN Bain speaking at the protest.
On Tuesday, a group of people led by political activist Lincoln Bain, protested outside the Office of the Prime Minister, demanding more action from the government to tackle the problem.
Their frustration mirrors that of many Bahamians, who feel that more needs to be done to crack down on illegal migration and the growing number of shanty towns in the country.
Central and South Abaco MP John Pinder recently told reporters that the issue of unregulated shanty towns in Abaco is about to reach a “boiling point.”
Similar concerns have been echoed by residents in North Andros and Harbour Island, islands that are also home to several illegal developments.
“It’s concerning to me because there isn’t any sanitary infrastructure at hand and there isn’t the proper permitting and things are being done that Bahamians, and my fellow Abaconians can’t do,” Mr Pinder added.
“We have to abide by the law. There is a certain procedure in place that makes a safe place for everyone to live and right now, those areas that we’re describing aren’t doing that and that’s a problem.
“I know that multiple agencies are dealing with this right now and, like I said, I am highly optimistic that this Davis-Cooper administration will make sure that we have some mediation and a good outcome for Bahamians.”
Last year, a multi-agency committee, composed of representatives from various government departments, ministries, and law enforcement agencies, was formed in response to the illegal developments.
Officials have remained tightlipped on the committee’s work to date, only saying that more information on the government’s next steps will become available in due time.
Never have so few (Gov’t) mislead so many (Citizens). All talk, no action.


They have exhibited plenty of action in favor of Haitians, Asians, Latinos, and others who are allowed to enter our country legally and illegally and steal the birthright of Bahamians totally unchallenged.
WE HAVE HAD ENOUGH!


The PLP and FNM have been “dealing with the situation” for 50 years and have proven beyond any and all doubt as not only abysmal failures but also as facilitators!
Haitians had designs in store for the Bahamas since the first black member of Parliament Mr. Steven Dillet who was also Haitian succeeded in encouraging other Haitians to become active in Bahamian politics.
Fast forward to modern times and we see Pindling, Ingraham, Christie, Minnis and now Davis are all of Haitian or other descent.
Hubert Ingraham blatantly said “the solution to the Haitian invasion was for Bahamians to learn Creol” Ingraham then tried to make Creol a mandatory language as part of the curriculum to be taught in schools.
Perry Christie declared at Botanical gardens Haitian Flag day celebrations among 1000.s of Haitians that “I am one of you” and “I look forward to seeing a Haitian Prime Minister in the Bahamas”
Rightfully Bahamians voted both of these traitors into oblivion.
Secondly, an examination of past and present Parliamentarians reveals the majority of the most influential people who have sat and are sitting in Parliament and Government House today are also of Haitian descent!
So the fact is the Bahamas has never had a Prime Minister of Bahamian descent, which totally explains why Haitians and others are the fastest economic growth groups in the country while Bahamians have fallen behind economically.
It is absolutely unreasonable to expect people of Haitian descent to guard and protect our country against their extended family of Haitian invaders!
Enumerable Illegal Haitians, Asians, and Latinos are aided by their legal family members to enter the country as their guests and then easily bribe corrupt immigration officials to issue work permits or they find under-the-table jobs for them.
No, Mr. Davis, you and your FNM counterparts have routinely sold out the Bahamian people and the Bahamas. We the real Bahamian people are sick and tired of your treason and will NOT stand for another day of this nonsense.
Please pack up and go, and take your Haitian brothers and sisters, Asians, and Latinos with you!


OpenID
Contents of this site are © Copyright 2023 Ellington. All rights reserved.

Haiti: Humanitarian and cholera Situation Report # 7 – as of 17 … – ReliefWeb