Subscribe to Here’s the Deal, our politics newsletter for analysis you won’t find anywhere else.
Thank you. Please check your inbox to confirm.
Yamiche Alcindor Yamiche Alcindor
Leave your feedback
U.S. Special Envoy for Haiti Daniel Foote resigned Thursday, saying that he did not want to be associated with what he called the United States’ “inhumane, counterproductive decision to deport thousands of Haitian refugees” back to the island nation.
Foote’s resignation letter to Secretary of State Antony Blinken, which was first obtained by the PBS NewsHour, comes as the Biden administration is facing widespread backlash over its treatment of Haitian migrants in Del Rio, Texas, where images of horseback border patrol agents using reins against migrants have sparked outrage. The Department of Homeland Security has since suspended those agents while it launches an investigation. Activists and some lawmakers have also been calling for the Biden administration to suspend deportations to Haiti. In his letter, Foote criticizes the deportations.
“I will not be associated with the United States inhumane, counterproductive decision to deport thousands of Haitian refugees and illegal immigrants to Haiti, a country where American officials are confined to secure compounds because of the danger posed by armed gangs in control of daily life,” Foote wrote in his resignation letter. “Our policy approach to Haïti remains deeply flawed, and my recommendations have been ignored and dismissed, when not edited to project a narrative different from my own.”
READ MORE: Options shrink for Haitian migrants straddling Texas border
He goes on to say that Haiti, a country facing a number of crises including political turmoil after the July assassination of Haitian President Jovenel Moïse, humanitarian problems after an earthquake rocked the nation last month, and security issues after kidnapping have skyrocketed, cannot absorb hundreds of migrants who have been sent back on daily repatriation flights.
“The people of Haiti, mired in poverty, hostage to the terror, kidnappings, robberies and massacres of armed gangs and suffering under a corrupt government with gang alliances, simply cannot support the forced infusion of thousands of returned migrants lacking food, shelter, and money without additional, avoidable human tragedy,” Foote said. “The collapsed state is unable to provide security or basic services, and more refugees will fuel further desperation and crime. Surging migration to our borders will only grow as we add to Haiti’s unacceptable misery.”
Foote was appointed special envoy for Haiti in July. In an announcement about the appointment by State Department, officials said Foote would “work with partners to coordinate assistance efforts in several areas, including humanitarian, security, and investigative assistance” and “engage stakeholders in civil society and the private sector as we pursue Haitian-led solutions to the many pressing challenges facing Haiti.”
A number of administration officials said Thursday that Foote mischaracterized the circumstances of his resignation.
“There have been multiple senior-level policy conversations on Haiti where all proposals, including those led by former Special Envoy Foote, were fully considered in a rigorous and transparent policy process,” Deputy Secretary of State Wendy Sherman said. “Quite frankly, some of those proposals were harmful to our commitment to the promotion of democracy in Haiti and to free and fair elections in Haiti so the Haitian people can choose their own future. For him to say that the proposals were ignored is, I’m sad to say, simply false.”
During a White House briefing Thursday, press secretary Jen Psaki also said that Foote never raised concerns about migration and pushed back against the accusations in his resignation letter.
“His positions were and his views were put forward. They were valued. They were heard. Different policy decisions were made in some circumstances,” Psaki said.

A senior Biden administration official, who spoke on the condition of anonymity to discuss internal deliberations, said Foote never objected to the repatriation of Haitians and never raised concerns about how Haitian migrants were treated in multiple interagency meetings.
Instead, according to the administration official, Foote issued an “ultimatum” in a recent meeting with senior State Department officials that he be given “full authority over the Haiti portfolio or he would resign.” The official said Foote was told that the U.S. government did not work that way and that the country’s policy toward Haiti needed to be a product of interagency dialogues.
The senior administration official also said Foote wanted to send U.S. special forces into Haiti to train the Haitian National Police to shore up the security situation on the ground, but that the administration did not agree with Foote’s plan and wanted to use “civilian tools” instead.
When asked who would replace Foote, Sherman said, “I don’t know that we need a replacement. In part we had named a special envoy after the assassination of the president of Haiti in the aftermath of the horrible storms and earthquakes and all of the other plights that the Haitian people have had to face – the ongoing confrontation of poverty. But we have an excellent ambassador in Haiti, Michele Sison, who is a nominee for a future post here in the United States. We have tremendous faith in her and in her leadership.”
This is a breaking story and will be updated as it develops. 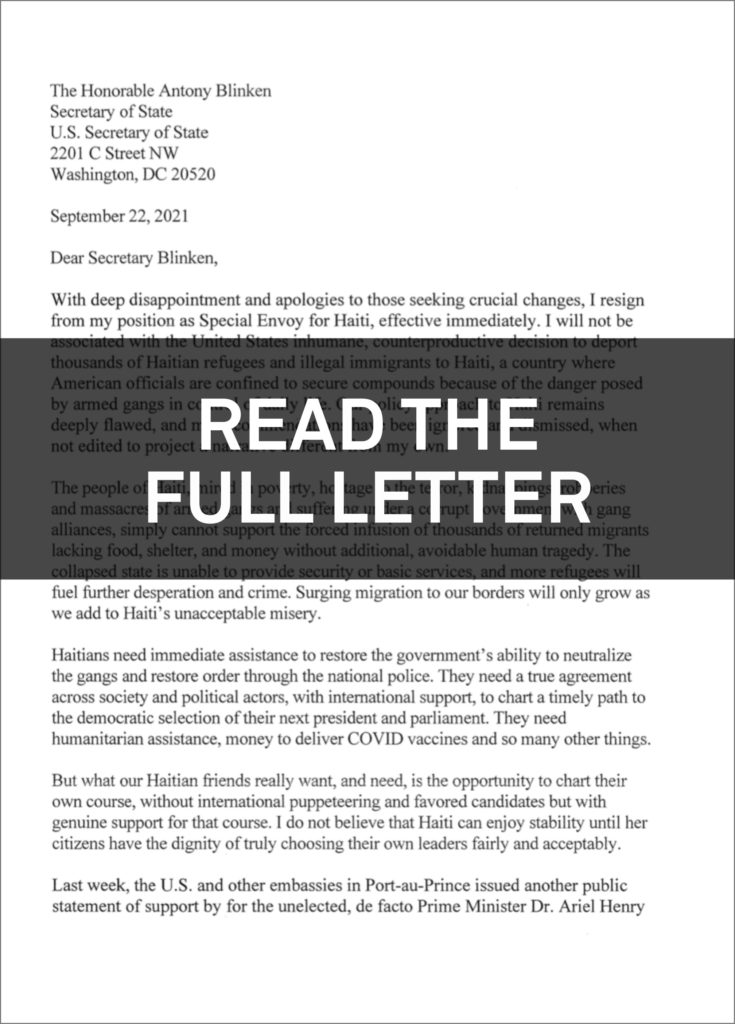 Read the full letter here.
Left: Daniel Foote, pictured here in 2016, submitted his resignation as special envoy to Haiti. Photo by Drew Angerer/Getty Images
By Roby Chavez, Gabrielle Hays
Yamiche Alcindor Yamiche Alcindor
Yamiche Alcindor is the White House correspondent for the PBS NewsHour; the moderator of Washington Week, the weekly public affairs show on PBS; and a political contributor for NBC News and MSNBC. She often tells stories about the intersection of race and politics as well as fatal police encounters. She is currently covering the administration of President Joe Biden and the impact of the coronavirus pandemic.
Support Provided By: Learn more
Subscribe to Here’s the Deal, our politics newsletter for analysis you won’t find anywhere else.
Thank you. Please check your inbox to confirm.
Additional Support Provided By:
© 1996 – 2022 NewsHour Productions LLC. All Rights Reserved.
Sections
About
Stay Connected
Subscribe to ‘Here’s the Deal,’ our politics newsletter
Thank you. Please check your inbox to confirm.
Learn more about Friends of the NewsHour.
Support for NewsHour Provided By