On Friday, the U.N. Security Council approved sanctions including asset freezes, travel bans, and arms embargos on anyone it considers threatening the peace or stability of Haiti.
The 15-member council voted unanimously to adopt a resolution drafted by the United States and Mexico. The first person sanctioned was Jimmy “Barbecue” Chérizier, a former officer of a special unit of Haitian National Police, and a leader of “G9 an fanmi e alye” (G9 Family and Allies), an alliance of nine gangs in the island nation’s capital, Port-au-Prince.

Some would have you believe G9 gang chief Jimmy Cherizier lives in a tin roof shack and sleeps on a dirty mattress in #Haiti like most of the folks he claims to lead. We beg to differ. pic.twitter.com/qiH4bd2Wvr

According to the text of the resolution, Chérizier has “engaged in acts that threaten the peace, security, and stability of Haiti and has planned, directed, or committed acts that constitute serious human rights abuses.”

“His actions have directly contributed to the economic paralysis and humanitarian crisis in Haiti,” states the resolution.

The unanimous decision of the council, which includes Russia as a permanent member, may come as a surprise to some of the protesters in Haiti. Earlier in the week, a protest had been held outside the U.S. embassy, with some people in the crowd waving Russian flags as a sign of opposition to what they see as Western interventionism. The first instances of recorded Russian flag use in the protests in Haiti date at least back to late March. 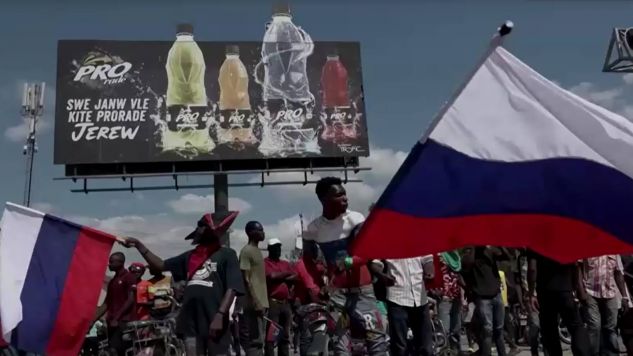 
Some would have you believe G9 gang chief Jimmy Cherizier lives in a tin roof shack and sleeps on a dirty mattress in #Haiti like most of the folks he claims to lead. We beg to differ. pic.twitter.com/qiH4bd2Wvr

Protests in Haiti have been sparked by the government’s announcement to cut fuel subsidies last month. As outraged Haitians went to protest the spending cuts in the streets, Chérizier’s G9 seized control of the Varreux fuel terminal in Port-au-Prince.

Gasoline and diesel supplies have mostly dried up and Haitians also face a shortage of drinking water amid a deadly outbreak of cholera. The government’s inability to bring the situation under control and dislodge Chérizier and his men from Varreux led to Prime Minister and Acting President Ariel Henry asking for an international intervention to quell the unrest. The United Nations has discussed sending a military force to confront the gangs and re-open the terminal. This, however, only added fuel to the protesters’ anger, with further calls for Henry’s resignation.

The humanitarian situation has gotten so dire, that the government of the Dominican Republic, with which the Republic of Haiti shares the island of Haiti and which have historically had an uneasy relationship, approved a request by a trading firm to export ca. 77,600 litres (20,500 gal.) of diesel to Haiti.

The company, AFA Trading, submitted the request to allow it to export the fuel through the Dominican-Haitian land border on October 17. The Industry Ministry approved the request in a separate letter of the same date seen by Reuters. The letters describe the operation as a re-export, indicating that the fuel in question was originally imported to the Dominican Republic. The fuel is meant for the supply of three hospitals and one manufacturing facility.
© Telewizja Polska S.A
00-999 Warszawa ul. J.P. Woronicza 17