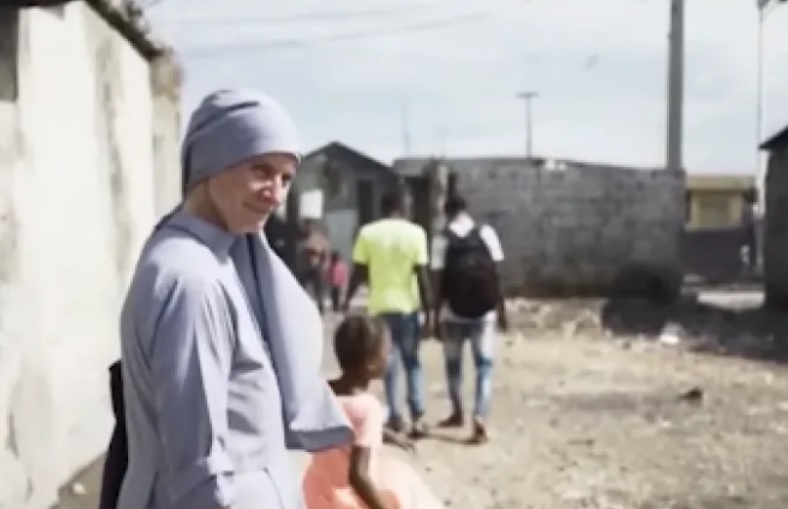 By Leonardo Colon
After nearly 20 years as a Missionary of Charity, Sister Paësie founded the Kizito Family, a religious community that serves children in a slum in the Haitian capital.
“What inspired me to found a new community — the Kizito Family — are the words Jesus spoke to Mother Theresa,” Sister Paësie told EWTN News Nightly.
“Before she began the Missionaries of Charity, she had seen a crowd of of four children in the dark . . . [Jesus] told Mother Teresa, ‘You see those kids, they do not love me because they do not know me. Bring my life to them.’”
Sister Paësie described the harsh living conditions that the Kitizo Family sees in the communities it serves, saying,  “[When we] get up in the morning there is no food in the house, no water to take a bath, no clean clothes because there [is] no money to buy a bucket of water … I mean it’s really extreme, extreme poverty.”

The ministry began by serving children on the street who were looking for a home, and it now has four to five homes where the community serves other locals as well, she said.
The ministry places a great importance on evangelization as well, providing education and access to the sacraments.
“[The third type of centers] we have are the catechism centers … We  have children [being formed in the Faith] and preparing for the sacraments,” she said. “During the years in Haiti, I realized that the poorest children do not have access to receiving the sacraments.”
Haiti has seen a surge of violence in recent years, and the number of kidnappings for ransom has increased in that time.
Haiti has also been affected by other crises, including natural disasters and a lack of health care infrastructure to deal with the COVID-19 pandemic.

Santiago Senator says Haitian issue is “easy to solve”, but nobody wants to face it – Dominican Today

Remarks by President Biden Before the 77th Session of the United Nations General Assembly – USEmbassy.gov

Santiago Senator says Haitian issue is “easy to solve”, but nobody wants to face it – Dominican Today