Last year, Los Angeles-based singer-songwriter TeaMarrr was summoned by Issa Rae herself to be the leadoff artist on Insecure. Now, just a year later, she’s going two for two with another feature on the show’s soundtrack for the final season.
“First of all, the melanin,” she praised about what she loves most about Rae’s critically acclaimed HBO series. “I love how it’s based where she’s home in LA. Being able to capture all the places that she grew up in, I really find that wholesome [and] heartening, but what I really love is the relationships with the Black characters. They’re so real, like everything that’s happening there is real life.”
Aside from the show itself, TeaMarrr did not skimp on the details when she gave Rae her flowers as not only a mogul, but as a friend and mentor. The series’ executive producer, who was also in TeaMarrr’s music video, introduced her artist around during the Soul Train Awards, and allowed TeaMarrr to be in the rooms she belonged. “She definitely did the press round. She’s very busy so she can’t be everywhere, but [she’s] definitely showing love and doing the promoting 10 days –  for HBO, for the artists and for the writers. It was really dope. She was really doing it all,” she said of Rae’s hands-on involvement in her career.
HYPEBAE spoke to TeaMarrr about her thoughts on the impact of the Insecure soundtrack for rising artists, perceptions of mental health and insecurities, as well as how Haitian culture influences her budding artistry.
Insecure Season 5 is available now to watch on HBO and HBO Max on Sundays at 10 p.m. ET, and on Hulu the following day.

How do you believe Insecure and its soundtrack helps upcoming artists elevate their brands through the show’s platform?
Oh, immensely. Insecure is like the club that everyone’s trying to get in, you know? When you’re there, you’re sitting and you hear a song there, you’re like, “Oh my God, not only did I get into this club, but this is the music here?” Once you have that Insecure stamp on your song, it’s different. It’s different for everybody, and I love that she was able to have writing camp opportunities. It didn’t matter if you were her artist that was signed, it didn’t matter if you were a big artist, blue check mark, nothing. If you have talent and you want to write a song for one of her shows and you’re at the writing camp, that’s literally the lottery ticket there. She really opened it up for artists to merge genres. She’s putting music on the map and she’s making it more exclusive.
How did your song “Cool Enough” come to be part of the soundtrack for Insecure?
I don’t know. They just picked it. I made it one day and then they picked it. It was a song where I acted like I was having impostor syndrome. It was one of those days when I’m always writing with someone in particular and from once they left the room ‘cause they had a long call, and I was like, okay, I’m just going to write this. When they liked it, it gave me that little reassurance, like, “You still got it. You could still write by yourself.” That’s what made me feel cool enough.
It’s funny that you mentioned imposter syndrome, because I was reading a lot of your past interviews. In an interview that you did with Issa for Interview, you said, “I want to remain as original as I can, but I’m so influenced.” What exactly did that mean, and do you ever find it difficult to be as authentic as possible in the music industry, in a world where imposter syndrome and comparison are so real?
I definitely think it’s hard because it’s hard, but it’s not hard. I say that because if an idea comes to you, it’s not like you thought, “Ludacris did this,” or you just had an idea and then somebody else is like, “Did you know so-and-so did that?” Maybe if you could accept that as great minds think alike, instead of I’m copying somebody because the whole great line, “great minds think alike” used to be a thing. Now imitation is annoying. I definitely think it’s not hard because what comes out of me is authentic anyways, and if it’s been done, oops, but it came out of me this way.
I understand it’s been done, it came out that way, but I did it and it came out this way, and I’m reminding myself of that. I have two songs and one about being stress-free called “Woosah.” They’re both about calming the f-ck down, but on a different day, on a happy day, I sound like this. On a sad day, I sound like this. You hear the difference in the song. The subject is the same — calm down, be stress-free — but I’m literally nicer in one and [more rude] in the other. I’m reminding myself that f-ck imposter syndrome, like f-ck it. At the end of the day, I can try and make that painting better. I can do it. I’m really trying to break out of that for real ‘cause it’s a real disease. It scared me for like a whole year of just not being able to write, and I’m back, I’m back, baby. 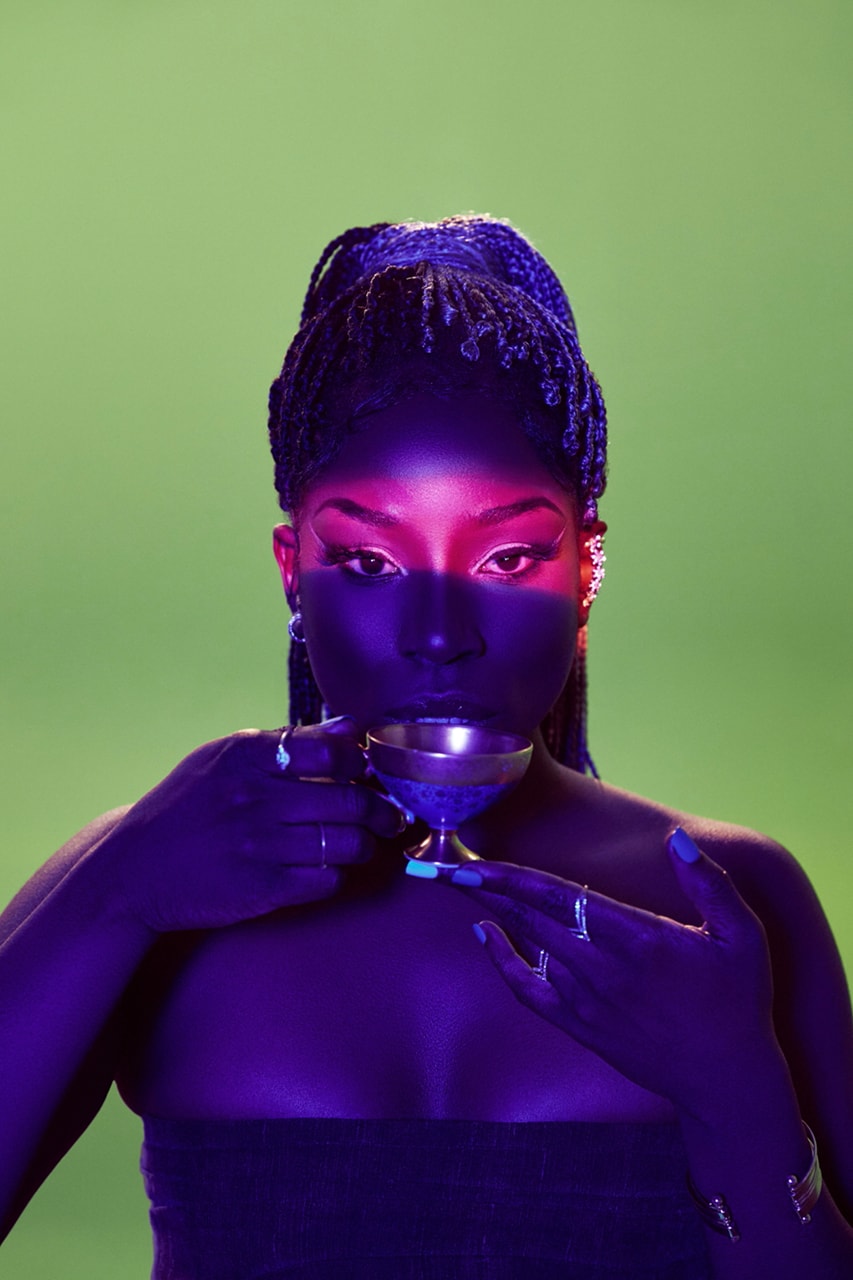 Bre’ann White
As far as authenticity, I wanted to take it back to where you’re from. How does your Haitian-American cultural background influence your music and your aesthetic as an artist?
It hasn’t influenced my music much and they’re going to do the red flag Haitian thing, but I wasn’t into Kompa music growing up. I was always made fun of for dancing like an American to it, so the trauma made me stay away from the whole genre itself. As I got older, I was listening to all the throwbacks and I’m like, “Dang, I want to find a way to put myself in it.” The culture is in my fashion, my clothes, my videos. I will speak Creole and all my videos have a Haitian flag somewhere except for like one or two. I try to infuse it in there lyrically and having a few “Sak pase? N’ap boule” moments in the song. I’ve done it a few times, but they don’t hit the music. I think I’m also judging [myself] now — everybody’s their own worst critic. After hearing BIA’s “Besito” song, I kind of want to take a shot at rapping in my own language, seeing what that sounds like.
When you described your sound during an OkayPlayer interview, you said, “I think if Amy Winehouse and Biggie Smalls had a baby, it would be me.” Do you still think that today and if not, who would be your inspirational music parents?
Wow, that’s so intricate. I love that. I still think if they had a baby, it would be me, but I definitely think I’m in a very transitional space where I’m letting in new songs, new artists in my mind, new visuals, new things that I just wouldn’t let happen. If you ask me my favorite color right now, I might have to think about it ‘cause I’m in a very, very transitional space right now.
What other projects are you preparing to release in the near future?
Yes, I’m preparing to release my album called You Should Probably Sit Down for This, and it should be coming out sometime next year. I’m tweaking all the paperwork and all that stuff. I don’t know if you noticed, but there’s like a trajectory with the projects — Thanks for the Chapstick, Before I Spill Myself and You Should Probably Sit Down for This, and then the next project will finish this year. I like to tell a story at all times.
Obviously the name of Issa’s show is Insecure, but what is one thing that you may be insecure about and why is it so important to address insecurities as an artist?
I’m insecure about how I come off sometimes. As an artist, we really shouldn’t be insecure because we’re constantly evolving, changing, inspiring and setting examples for people. It should just be constant security instead of [being] insecure. I’m insecure about my temper. I get so excited really fast and I get so mad really fast. I get insecure about what that looks like and I’m insecure about my mental health.
It used to be like, “Oh, she’s weird,” but now it’s like, “Oh no, she has bipolar disorder.” Like calm down and be nice, you know? I’m insecure about if they don’t know that I’m just a weirdo. I’m insecure about my personality ‘cause again, I’m in a transitional space right now, so I’m super insecure about what I like, what I’m being like. Is this okay? But then I’m feeling secure because there’s a giant team of positivity and empowerment behind me. As an artist we’re insecure about everything.

D’Shonda Brown is a freelance culture journalist, public speaker and mental health advocate based in Brooklyn, New York with a passion for mental health, social justice and uplifting the Black community through her writing. As a mental health advocate and suicide attempt survivor, in 2019, D’Shonda became Mental Health First Aid Certified for adults and children, and graduated from the Advocacy Ambassador Program by National Alliance on Mental Illness. D’Shonda is a proud Spelman College graduate and has interviewed notable names from Angela Rye and Soledad O’Brien to Chloe x Halle and Justine Skye.
You can connect with D’Shonda on her Instagram and website.

2021 Hypebeast Limited. All Rights Reserved.
Terms & ConditionsPrivacy Policy
HYPEBAE® is a registered trademark of 101 Media Lab Ltd, in the U.S. and Hong Kong.
Keep updated on the latest news.

Keep updated on the latest news.
We charge advertisers instead of our readers. If you enjoy our content, please add us to your adblocker's whitelist. We'd really appreciated it.
Learn More ›

Haitians in the DR: The outcasts of society | Opinion – Haitian Times