Author: Tawanda Sachikonye, University of Cape Town
Taiwan is widely renowned as one of the world’s most advanced and highly developed economies. But such remarkable success for a resource poor island of approximately 23 million people has often overshadowed Taiwan’s notable achievements in combatting global poverty and supporting sustainable international economic development. Taiwan’s engagement with Haiti highlights the important role it plays in the global fight against poverty and underdevelopment. 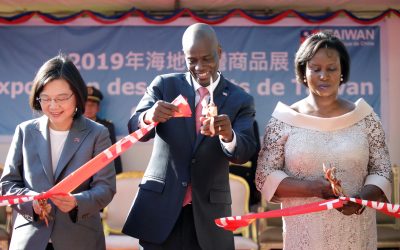 For over half a century, Haiti has actively supported Taiwan’s sovereignty and advocated for its greater recognition within the global community, including in key multilateral forums. In return, Taiwan has provided Haiti with both monetary resources and technical expertise for developmental projects relating to agricultural development, human capital development and humanitarian and disaster relief assistance. As Taiwan has consolidated its democracy, development cooperation with Haiti has become more formalised and transparent.
Haiti is second only to Honduras in the number of development assistance programs among Taiwan’s formally recognised diplomatic and political allies. In a context where Taiwan has lost at least one diplomatic ally every year since 2016, except 2020, Haiti has become a key priority for Taiwan. Haiti’s immediate neighbour the Dominican Republic switched allegiance from Taiwan to China in 2018, and key allies such as Honduras and Paraguay are considering formal diplomatic ties with China due to local and international pressure.
Haiti’s persistent challenge of meaningfully integrating into the global economy has been exacerbated by its dire domestic crises. These crises are an outcome of the Haitian state’s inability to formulate and sustainably implement national development policies over decades. This has deepened Haiti’s underdevelopment and undermined the state’s ability to effectively combat food insecurity, unemployment and persistent conflict, which has intensified crime and violence. Consequently, Haiti is one of the 50 poorest countries in the world and the poorest country within the Western Hemisphere.
Taiwan, as one of Haiti’s closest allies, can offer the Caribbean nation much needed technical expertise and assistance on national development objectives. While wealthier and more powerful partners, such as Canada and the United States, provide huge sums of aid and humanitarian assistance as well as vital economic lifelines through preferential trade access for Haitian goods, Taiwan offers a more direct and ‘hands-on’ approach.
Taiwan does not seek to replicate the largesse of Haiti’s larger and wealthier donors but invests in sustainable Haitian developmental initiatives or projects at the grassroots level. These range from those located at the community and municipal levels to the provincial level. The emphasis is on local ownership, feasibility and sustainability. In this way the Taiwanese government actively champions the ethos of sustainable development.
Haiti’s key developmental challenges adversely impact the nation’s food security and international trade prospects. These challenges include inadequate levels of electricity and energy generation, poor road infrastructure, the pressing need for irrigation and hydro-agriculture systems and appeals for investment in packaging and food processing equipment. Haiti’s vulnerability to natural disasters also highlights the need to prioritise climate security.
The Taiwanese government has noted these challenges and, in some instances, already extended its hand to assist. One key project focussed on constructing and upgrading substations and transmission towers at a projected cost of US$146.98 million in the capital of Port-au-Prince. A portion of the allocated funds will be channelled towards building an estimated 43 solar and thermal microgrids throughout the country. The assassination of president Jovenel Moïse in 2021 and the ensuing turmoil has delayed the facilitation and completion of this initiative. This is unfortunate as the project would have been Taiwan’s first official development assistance loan to a diplomatic ally.
Taiwan has facilitated various sustainable food security and agricultural development projects. These include the national rice seed production enhancement project and the US$10 million donation by the Taiwanese government in tandem with SpeedTech Energy, a Taiwanese company, of 80 of the 150 solar pumps pledged by Moïse to irrigate 15,000 hectares of land set aside for agricultural production. In the wake of the 2021 earthquake, Taiwan’s Disaster Relief Foundation, under the auspices of Taiwan’s foreign ministry, disbursed US$500,000 worth of disaster relief aid to Haiti to strengthen food security and production.
Taiwan has worked for decades to reinforce Haiti’s food security, particularly through enhancing rice harvests and seed security. The Taiwanese Technical Mission to Haiti has successfully promoted the adaptation and dissemination of rice seed types which have resulted in ‘improved genetic qualities and higher yields per hectare’ within the Artibonite Valley, Haiti’s major rice producing region. The Artibonite Valley accounts for an estimated 80 per cent of Haiti’s rice production.
Taiwan’s cooperation and relations with Haiti highlight the impactful, targeted and sustainable interventions Taiwan promotes for poverty reduction and socioeconomic development. The UN has noted the failure of decades of large-scale aid worth billions of dollars in Haiti. The localised, focussed and ultimately tenable Taiwanese approach holds key lessons for other donors.
Tawanda Sachikonye is a PhD candidate in the Political Studies Department at the University of Cape Town.
East Asia Forum welcomes comments, both for adding depth to analysis and for bringing up important new issues. Original comments adding insight and contributing to analysis are especially encouraged.
The editors retain the right to refuse and edit comments at any time.
Your email address will not be published. Required fields are marked *

The disconcerting spectacle of carnival in Haiti – in pictures – The Guardian