United States
RNS
Rev Dieufort Fleurissaint, chair of Haitian Americans United, a Boston area non-profit, said he is thankful for God’s presence during this holiday season, even if the crisis in his homeland of Haiti is never far from his mind.
The situation in the Caribbean nation of 11.5 million people has deteriorated drastically in the past year, with the 2021 assassination of President Jovenel Moïse exacerbating the effects of a series of natural disasters. 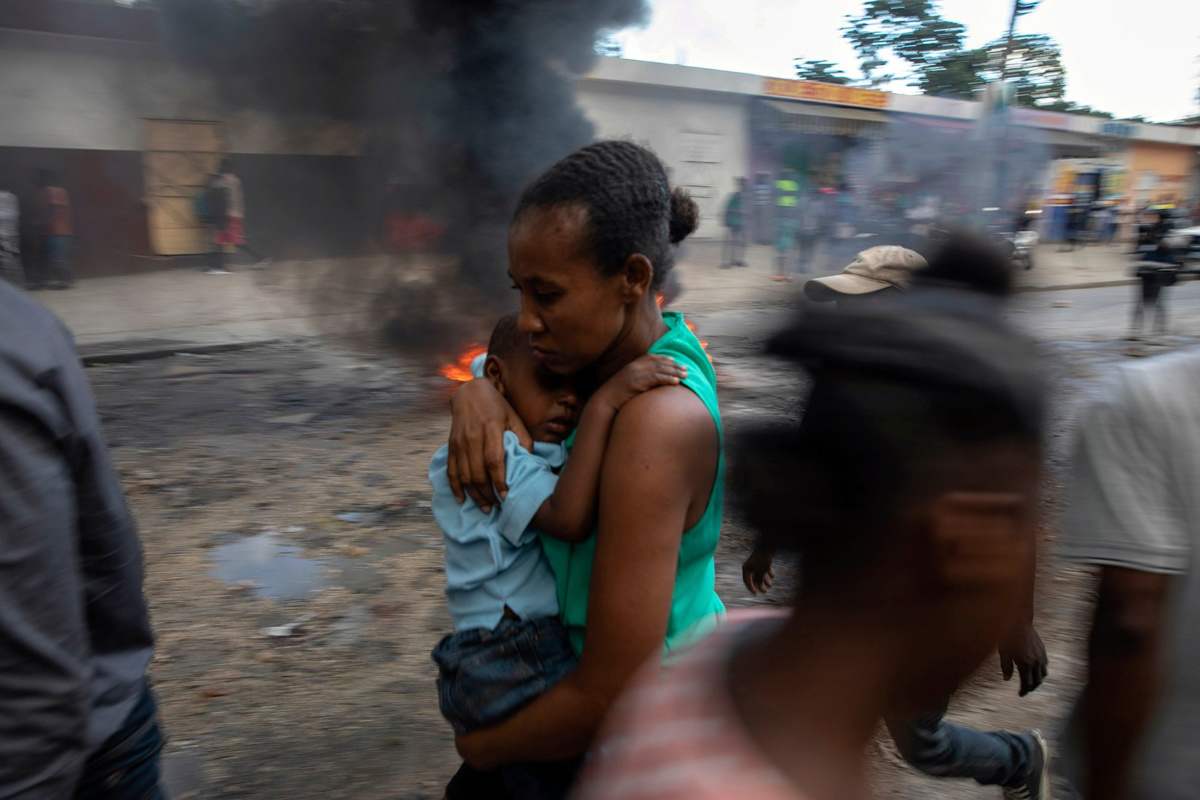 A mother carries her son as she runs past a burning barricade during a protest against the government in Port-au-Prince, Haiti, on Friday, 18th November, 2022. PICTURE: AP Photo/Odelyn Joseph.
The violence in Haiti made headlines in 2021, after the President’s assassination in July and the kidnapping of 17 American missionaries in October. More recently, the United Nations has made a number of dire pronouncements warning of gang violence and an outbreak of cholera.
Fuel shortages have further paralysed schools and businesses, leaving many stuck at home, unable to work or obtained needed supplies for daily life.

“The situation in Haiti has been dire for many years,” said Fleurissaint. “In 2022, with widespread kidnappings, killings, fuel shortages and food shortages — the situation has worsened.”
Fleurissaint worries that few people are paying attention, saying that news coverage has been sparse.
Haitians in the United States and other countries routinely send money and other support home to relatives and family members unable to make a living. “The brunt of the responsibility falls on the diaspora,” he said. “We have to send money to loved ones, family and friends.”
A number of high-profile charities, such as Catholic Relief Services, Doctors Without Borders and World Vision, are active in the country, but Fleurissaint said that action is needed from outside governments as well.
The Biden administration recently extended Temporary Protected Status for some Haitians currently in the United States, but that status does not apply to Haitians who entered the country after 6th November, 2022.
“We are providing much-needed humanitarian relief to Haitian nationals already present in the United States,” Secretary of Homeland Security Alejandro N Mayorkas announced in early December. “The conditions in Haiti, including socioeconomic challenges, political instability, and gang violence and crime – aggravated by environmental disaster – compelled the humanitarian relief we are providing today.” 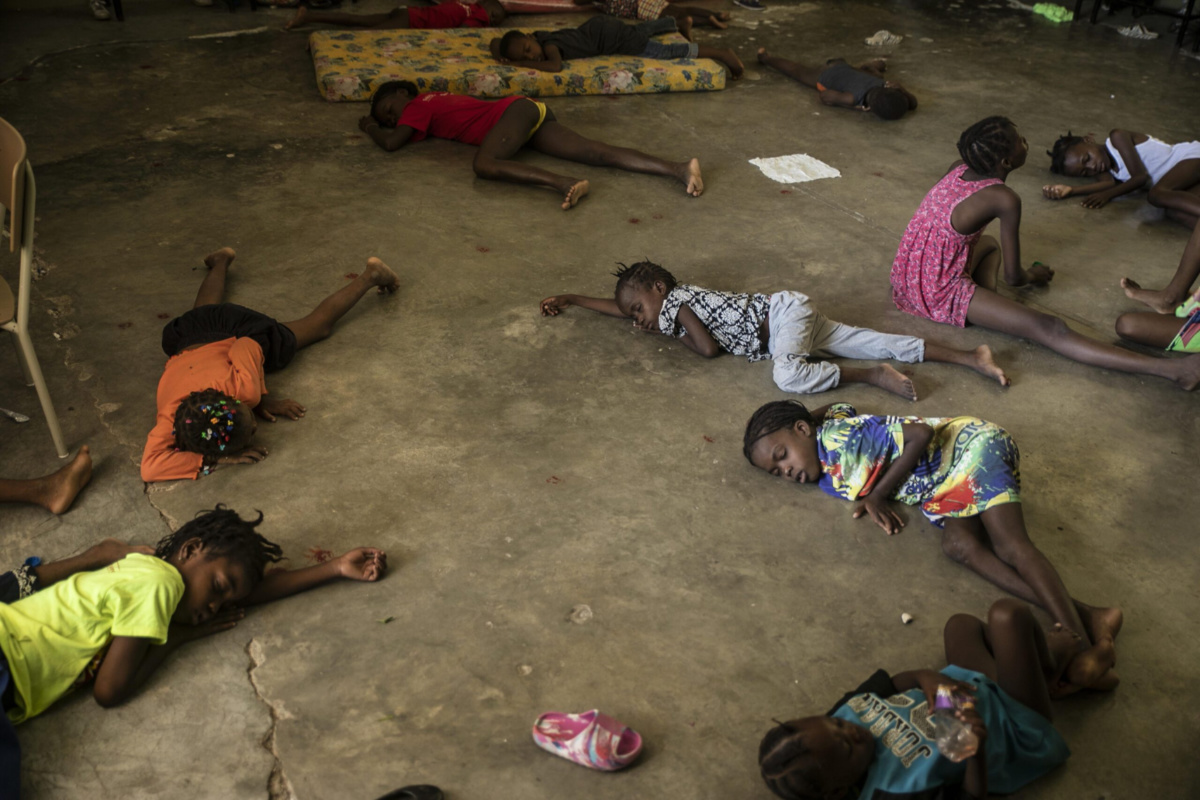 Children sleep on the floor of a school turned into a shelter after they were forced to leave their homes in Cite Soleil due to clashes between armed gangs, in Port-au-Prince, Haiti, on Saturday, 23rd July, 2022. PICTURE: AP Photo/Odelyn Joseph.
Fleurissaint said he and other Haitian American leaders have met with members of Congress and other leaders in Washington, pressing them to do more for Haiti. He said he opposes military intervention, saying leaders there should instead be given more resources and training to restore order.
He urged his fellow Christians and other Americans to call their elected officials, citing direct pressure as the only way to put the crisis on their radar, he said.
Fleurissaint said that faith sustains many Haitians during this crisis.
“No matter what, we know where our strength comes from,” he said.
#mc_embed_signup{background:#fff; clear:left; font:14px Helvetica,Arial,sans-serif; width:100%;} /* Add your own Mailchimp form style overrides in your site stylesheet or in this style block. We recommend moving this block and the preceding CSS link to the HEAD of your HTML file. */ #mc-embedded-subscribe-form input[type=checkbox]{display: inline; width: auto;margin-right: 10px;} #mergeRow-gdpr {margin-top: 20px;} #mergeRow-gdpr fieldset label {font-weight: normal;} #mc-embedded-subscribe-form .mc_fieldset{border:none;min-height: 0px;padding-bottom:0px;}


Lesly Michaud, senior operations director in Haiti for World Vision, the evangelical Christian charity, said the cholera outbreak, which has sickened more than 1,400 people and killed more than 300 since October, has aggravated the already desperate situation.
But Michaud also pointed to inflation as an increasing worry. With prices rising at a 47 per cent annual rate, inflation threatens to expand food insecurity, which affects nearly half the population, according to data from the World Food program.
“The majority of Haitians live from day to day,” Michaud told Religion News Service in an email. “This multidimensional crisis has only aggravated the precariousness and even the vulnerability of many families in particular who had difficulty in obtaining food supplies or simply water.”
The country’s struggles have left aid groups themselves struggling to operate during the current crisis. “The highly volatile security situation is putting at risk critical humanitarian operations that many vulnerable Haitians rely on, Michaud said.
Americans can help by donating to charities on the ground in Haiti, said Michaud, who also suggested calling elected officials to ask for “diplomatic, economic and security-related support” and a transition plan to address the country’s future, he said. 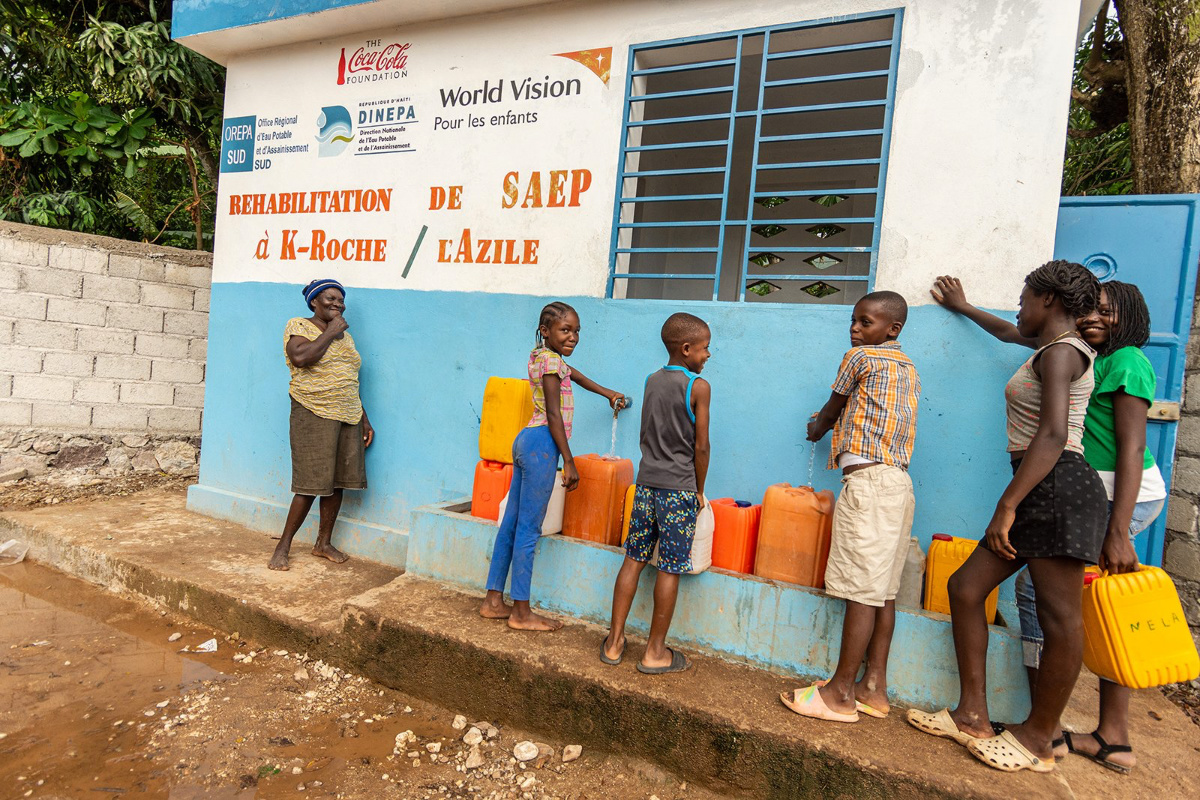 People collect clean water at a station sponsored by World Vision. PICTURE: Courtesy of World Vision
Despite the current chaos, World Vision is still providing emergency aid while working on long-term projects to supply water and sanitary infrastructure and to support families with aid, along with agricultural training and support to improve their situations.
But the crisis has put such pressure on families, according to Frédérique Jean-Baptiste, a program manager for Catholic Relief Services, that her work has been to help them get the resources they need simply to stay together. She works with the Changing the Way We Care program, which tries to keep children with their families rather than removing them to orphanages after disasters have separated parents from their homes.
Most of the children living in Haitian orphanages have at least one living parent, said Jean-Baptiste. The number of orphanages, she said, increased dramatically following the 2010 earthquake, which killed 300,000 people and left 1.5 million people homeless, according to the United Nations.
Orphanages have often been seen as the best way to care for children with missing parents, while other families have been led to think about adoption. But most vulnerable children, said Jean-Baptiste, have parents who only need support in order to provide a healthy and safe home for their children.
Jean-Baptiste and her colleagues are helping connect children with their parents and provide tuition assistance, micro-loans, case management and other services to reintegrate families.
She called on Catholics and another fellow Christians to support these efforts. “In order to have a lasting impact on children’s lives, it is critical for Christians to direct their giving to support caring for their children rather than in residential centers,” she said.
Jean-Baptiste, born in New York to Haitian parents, moved to Haiti in 2016 to work with medical missionaries on community health initiatives. She decided to stay to work with Catholic Relief Services, first working with orphans and vulnerable children affected by AIDS, then moving to the child protection program.

Jean-Baptiste asked people to give – and to pray for children and their families this holiday season.
“One thing that we can do actually is to pray and include vulnerable children and families as well as to commit to serving them in our prayers.”

See a link to your organisation listed here!

See your business or event listed here for an introductory price from just $1.50 a day or from $20 a month on the Sight Directory (see below). Inquiries to advertising@sightmagazine.com.au

Sight+ is a new benefits program we’ve launched to reward people who have supported us with annual donations of $26 or more. To find out more about Sight+ and how you can support the work of Sight, head to our Sight+ page.

LIMITED OFFER! Sign up to a voluntary contribution of $A10 a month or more to support our work and we’ll send you a free beanie! Click on this ad for details…
A D V E R T I S E M E N T

Ever wondered about where Sherlock Holmes lived, who the real Dick Whittington was or the amazing story behind the discovery…
We’re building a directory of organisations and businesses – The Sight Directory
24 DAYS OF INSPIRING CHRISTMAS FILMS FOR ADVENT 2022

We’ll be featuring a new film each day during Advent.
To see today’s entry, head here… 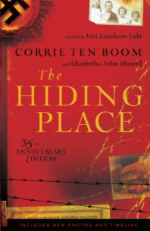 For January, 2022, we’re reading Corrie ten Boom’s classic 1971 book, The Hiding Place, recently re-released in a 35th anniversary edition…
To register your group (and receive our discussion notes via email) and for more details about how the club works, head here…

It's Not Just the Missionaries — There Were 782 Kidnappings in … – Truthout