It was already 3:40 pm when Christina Jean Paul Benoît kindly asked a man to remove the photo of her late husband from the tree to which it had been tied. We were in the courtyard which was being set up to host her husband’s wake. “I can’t look at him because I now live with this great emptiness in me. I don’t want this photo placed there” she states.

In her 80s, Christina Jean Paul Benoit still retains all her lucidity and vigor. She remembers having met Anselme Benoît at the age of 19. “We were married and had eight children. And now he’s gone today at 89” she says, seeking comfort from her children, and her brother.

Anselme Benoît was a tailor. In 1967, he was part of a communist association called Soleil duvaliériste de Kazal. This name – friendly to Duvalier – was given to the association in order to hide its real anti-Duvalierist objectives. During his lifetime, Benoît recounted having abandoned the association after members were asked to kill Duvalier soldiers and bring their weapons to the group’s office.

In 1969, soldiers and militiamen of the Duvalier regime crushed in blood a peasant uprising in Kazal. These peasants were protesting against the abusive taxes and the ban on using the river in their village.

“Benoit barely survived the Kazal massacre. I remember that we were separated during the tragedy because everyone was taking refuge in the woods. He spent several days living off raw potatoes and drinking water from the Torcelle River. After a while, he couldn’t take it anymore. It was then that he made the decision to return home”, reports Christina Jean Paul Benoît. 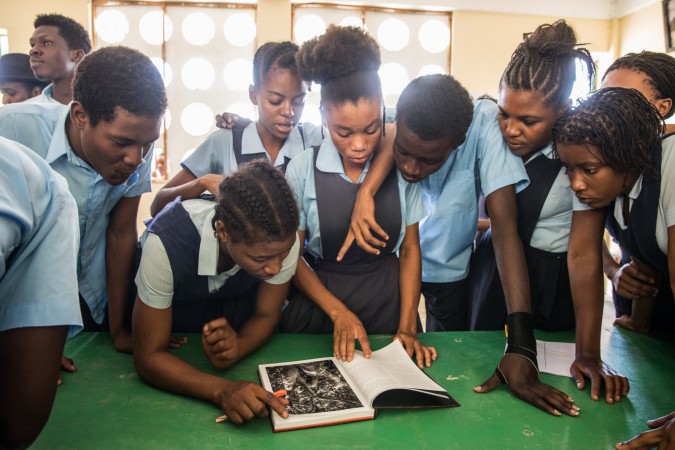 Kazal is a communal section of Cabaret, a commune attached to the West Department. The inhabitants of the area make a living mainly from agriculture. This village was created by the Polish sent by Napoleon to support the French army. However, they joined the national army to lead the fight for the independence of Haiti. Dessalines granted them these lands by way of recognition.

Under the dictatorship, the Communists grouped around the Unified Party of Haitian Communists (PUCH) transformed Kazal into a hotbed of resistance. For example, the members of this party and the inhabitants of the area had forbidden Duvalier’s militia to arrest Jérémie Éliazer. This man was a leader who fought against restrictions imposed by Duvalier on the use of the Torcelle River for irrigation of the fields of Kazal farmers.

Opponents attacked the militia office and tore up the black and red flag adopted by Duvalier, replacing it with the blue and red flag (actual colors of the Haitian flag). Duvalier wanted to put an end to these communist opponents in the area.

In response, the army carried out from March 27 to April 11, 1969, an operation which sacked the city. Many peasants lost their lives. Others were reported missing. Dozens of houses were set on fire, cases of rape and theft of many peasants were also recorded. 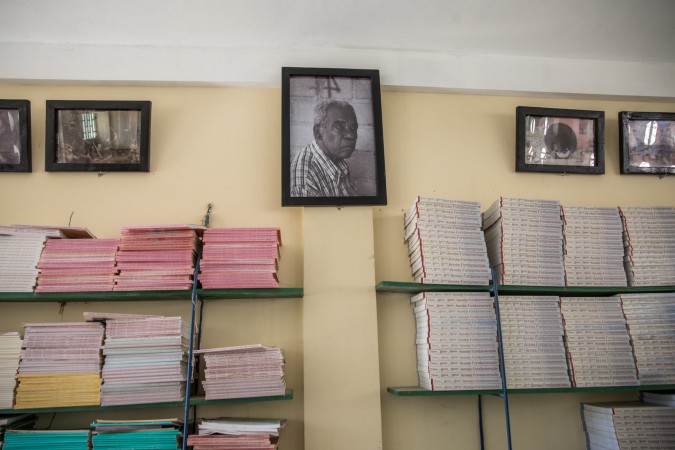 Saved by the skin of his teeth

Most of the inhabitants of Kazal had taken refuge in the hills during the operation carried out by the army and the militia of the dictatorial power.

It is in the middle of this vast operation that Anselme Benoît, exhausted, decided to come out of his hiding place. “The militia men caught him when he left”, his wife remembers. The widow says that they made him dig his own grave so they could bury him alive. “After beating him, they asked him to say his last words”, she says.

Anselme Benoît replied: “The hole is not deep enough, we should dig even deeper. Because, I have not wronged anybody my whole life, I would not want my smell to be a problem for people after my death”. It was then that a sergeant ordered him to be released.

52 years later, on the night of Sunday March 21, 2021, Anselme Benoît took his last breath. The Kazal community chose to organize his funeral on Saturday March 27, a day which coincides with the commemoration of the 52 years of the massacre.

Kolektif 2D (K2D) in collaboration with the Foundation for Knowledge and Liberty (FOKAL) visited the Jérémie Eliazer high school in Kazal for the 52nd year anniversary of the massacre. K2D took the opportunity to donate several copies of a photographic work to the school’s library. This work by six photographers, published in 2019, highlights the testimonies of dozens of survivors of the massacre.

Today, Kazal’s new generation still commemorates this period in their history. During the exchanges that K2D had with the students we realized how powerful were the emotions evoked by this period and how present they were in their testimonies. Many have lost a great-grandparent in the tragedy. They were either killed by the Duvalierist militias or committed suicide to avoid an atrocious death at the hands of the representatives of the dictatorial regime.

Carmène Élie, a student in the new secondary 3 (NS3), is one of the young people whose grandfather, Elisme Elie, chose to end his life during the tragedy. “To avoid being captured and martyred, he hanged himself” his father, Grevit Élie, told him. 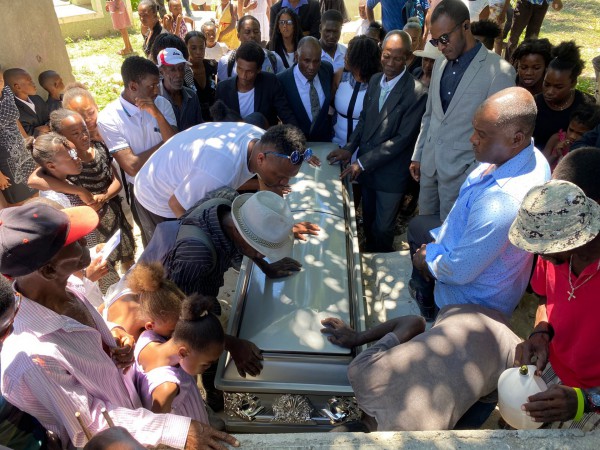 Anselme Benoît took his last breath. The “Cazalaise” community chose to organize their funeral on Saturday March 27, a day that coincides with the commemoration of the 52 years of the massacre. Photo: Reginald Louissaint Jr

Louis Juste Isméo, the grandfather of Jean Odney Nonnon, also in NS3, made the same tragic decision. “This part of my hometown history will be forever etched in my memory. My grandfather’s story touched me personally” he says.

24-year-old Cherby Joseph, a resident of Kazal, believes the community is in dire need of a vocational school. “Young people can complete their traditional study cycle, thanks to the establishment of the Jérémie Eliazer high school in Kazal in 2000. After that, we have nowhere to learn a professional trade”, he says.

Few parents send their children to Cabaret for professional studies. “The journey is long and there is no road”, he complains. He works as an apprentice mason. Similus, who completed his studies at the age of 23, confirms the words of Cherby Joseph. He says that Kazal had benefited from a few crumbs from the state thanks to the first presidential term of René Garcia Préval.

“The president’s marriage to a native of Kazal, Guerda Benoît, during his first mandate, facilitated access for the construction of the school and the establishment of a power station. After hurricane Ike in 2008, the electrical installations were ransacked. Since then, nothing has worked”, explains the community sector council, who, for 16 months already, has not received a penny of his salary, nor the operational costs of his office.

“We can’t create good projects. We lack the means and our efforts are doomed to failure because of high placed authorities”, he says. He severely accuses the administration of Jovenel Moïse of favoring community sector councils that are close to the PHTK, the presidential party, by making a fund available to them, a million gourdes provided for in the 2017-2018 budget, to carry out projects in their respective areas.

The community sector council coordinator and a judge are the only state representatives in the locality. Zero police for the 40,000 souls who reside in this community. The Torcelle river is the only source of wealth for the communal section. The water from this river is used to irrigate the fields in a traditional way.

At the same time, the mountains overlooking Kazal are completely bare due to excessive deforestation in this region.

Photos are by Valérie Baeriswyl