The city of Miami Gardens, Florida has honoured a Saint Lucian by naming a day after her.
Madeline Anzilla Peters was honoured on March 7, 2015 by the city’s former Mayor, Oliver Gilbert for her charitable work in the area.
He officially declared March 7 as “Sister Peters Day” via a proclamation signed in 2015.  Gilbert stated that “the city of Miami Gardens takes great pride in recognizing individuals and organizations that have made exemplary contributions to our community; the Sister Peters Charity began in March 2012 on the premise of faith and the practice of charity by Ms. Madeline Anzilla Peters, also known fondly by friends and family as Sister Peters.”
Since her passing her children has kept her memory alive by hosting, each year March, the Sister Peters annual charity event. Her children Wayne and Sharon, identify an individual or family in dire need of monetary assistance. All proceeds of the charity event go to the individual or family chosen.
Sister Peters was born to Willimena Augustine and Alick St Jiles in Castries Saint Lucia on March 3, 1925. She migrated to Grenada at the age of 24, to work on the island’s first hotel, the Islander Hotel. Like a true West Indian she established her roots on the island, fell in love, formed deep friendships and made Grenada her home and later married Collins Julien Peters and raised 12 children. 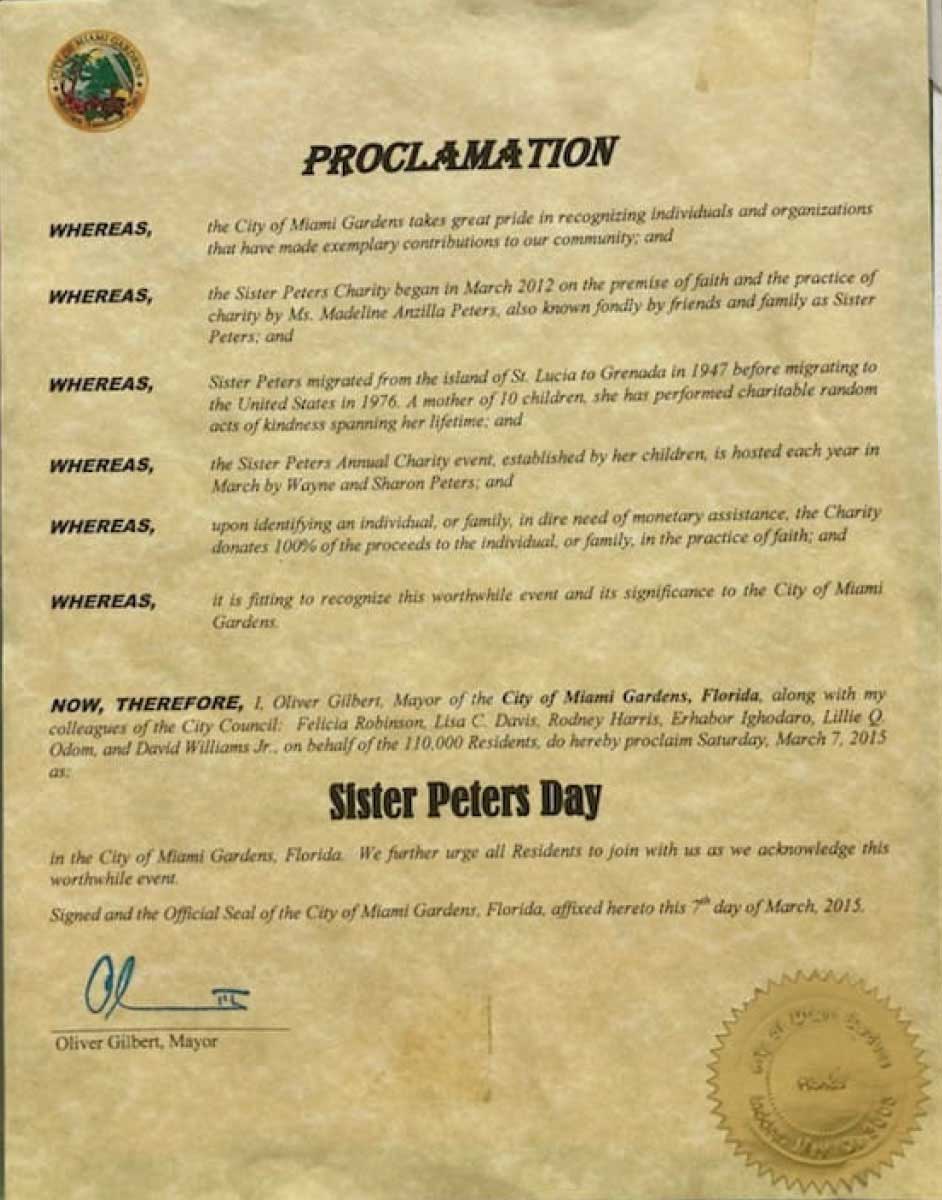 In the summer of ‘76, Sister Peters migrated to the United States where she worked for Judge Pero. At the end of her employment, she became a certified nursing assistant and dedicated many years in this profession and even dedicated the time to learn American sign language to further help others in her ministry. She was curious and keen to learn new things. She was also an ardent reader.
Sister Peters was a practicing Christian, living a life of active prayer, meditation and personal spiritual development. As a member of the Berean Bible Church in Grenada, she grew in her spiritual walk. When she migrated to the US she settled in Florida in the City of Miami Gardens becoming a long-standing member of New Way Baptist Church. She lived her life in the practice of faith through fellowship and conversation with people of other faiths and from all walks of life.
Sister Peters’ patience and keenness to know people deeply seemed to be boundless. In her heart there was always room for a stranger. She was a faithful and tireless prayer warrior who could find words of counsel and encouragement for any situation. She knew the power of honesty, respect and integrity and inspired others to live a godly life.
Sister Peters was a caring soul, driven to participate in charitable deeds to better the life and health of others. One of her most notable sayings was “there are no strangers in the world only friends you have not yet met.” she gave willingly and generously.
Her generosity knew no bounds and extended abroad to missionaries in Africa as well as orphanages in Haiti and other charities throughout the Caribbean and Miami Gardens. Indeed the fullness of her life came from doing charitable acts of God.
She will be remembered for her outstretched arms, open heart and charitable spirit by her family, friends and community.
Sister Peters’ family was her pride and joy. She loved them unconditionally; her 10 children, 32 grandchildren, 41 great grandchild, three great, great grandchildren along with dozens of sons and daughters in law.
Peters died on March 11 2017.

Should a Confederate statue return to this Florida downtown? A decision is coming soon – AOL

Should a Confederate statue return to this Florida downtown? A decision is coming soon – AOL