Minneapolis, MN – On November 14, about 30 people gathered at Mayday Plaza on a cold day with signs and banners to demand asylum for Haitian immigrants. The action was planned by the Minnesota Immigrant Rights Action Committee (MIRAC) to demand legalization for all, this time with a focus on the recent blatant abuses of Haitian immigrants at the hands of Border Patrol agents on horseback at the Texas border as well as the recent upsurge in deportations of Haitian immigrants under Biden. It was endorsed by the Anti-War Committee (AWC), the Haiti Justice Committee of Minnesota, and Filipinx for Immigrant Rights & Racial Justice Minnesota (FIRM). Protesters held banners and signs demanding, “Legalization for all!” “No militarized border!” “Asylum for Haitians” and “End abuse of Haitian migrants.” The group chanted and waved to cars that honked in support as they drove by.
Ruben Joanem from the Haiti Justice Committee of Minnesota reminded the crowd that people do not choose the country and circumstances they are born into. He talked about the recent increase in deportations of Haitian migrants and how most of the flights coming into Haiti right now are full of deportees. “The notion of calling people ‘illegal people’ for whatever reason is a stupid idea,” he said, “all we are asking for is for a little bit of dignity during our existence on this earth.”
Greg King from FIRM reminded the crowd that although Trump is no longer in office, immigrants are not being deported any less under Biden. “We’re happy that Joe Biden was elected, it’s a step away from the abyss, but it’s not a big step and we’re back to a period of time in the Obama/Biden administration where deportations were actually higher than during Trump. We’re still holding onto refugee camps at the border, kicking asylum people out without even due process, and detaining children and separating families – it’s still happening. There are many stories of refugees being stripped of their citizenship and being deported every day.”
Brad Sigal, a member of MIRAC, brought attention to the current budget bill, which could include a pathway for legalization. He reminded the crowd of the Democrats who are in control of Congress and who ran on promises of immigration reform, and said, “the time is now for them to legalize people who are undocumented.” He presented a call to action to the crowd asking them to call their representatives and demand that they include legalization for immigrants with DACA, TPS and essential worker status in the budget bill.
Despite the cold, the crowd was spirited for the duration of the action, and there was overwhelming support from passing drivers, passengers and bus drivers.
Buy a copy of Frank Chapman’s autobiography, The Damned Don’t Cry, from Changemaker Press 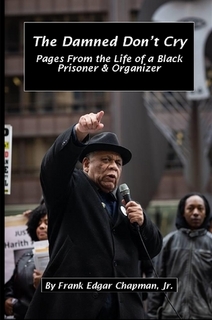 “Working with Frank over the past five years, I have seen something that highlights the importance of this book. In his role leading the struggle for community control of the Chicago police, Frank instantly commands the respect and trust of those in and around the movement who have been wrongfully convicted or who have wrongfully convicted family members in prison. When he points the way forward, they believe in him. This book will only cement further the status he has in their struggle.”
— Joe Iosbaker

In Haiti 'people are afraid' as kidnappings surge – CNN