Child welfare authorities in Florida confirmed in January that James Corrigan Clay “abused” and “sexually assaulted” one of the two underage children he adopted with his ex-partner, Shelley Jean, in Haiti

In addition to his ministry located in Pétion-Ville and his tattoo parlor Ayiti-Ink , the American pastor, James Corrigan kept a blog on which he recounted the ups and downs of his life as a “Blan” (white man) in Haiti.

At the end of December 2016, he published a letter written by hand by a young seventeen year old Haitian girl named Jenny.

“I want to make love with you, so that you can help me with my sister’s medical surgery” the letter said, ending with “I love you Corrigan” typed in disproportionate characters, compared to the rest of the message.

James Corrigan claims to have helped Jenny a lot, after ordering her to come to him rather than “trading her body for money”. And when the young girl offered him her body, he admits that his loneliness, probably as a result of his divorce from Shelley Jean two years earlier, caused him to “linger” on the proposal. 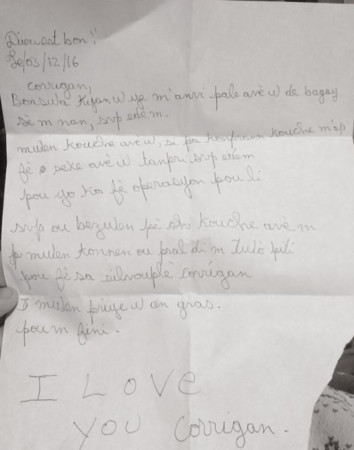 Nothing in the blog post indicates whether there was intimate contact, which would have been illegal under Haitian law. However, five years later, accusations of sexual abuse towards children were linked to James Corrigan Clay’s name, more specifically in a case involving one of the two children he adopted in Haiti.

According to a letter dated January 13, 2021, provided to his former partner, Shelley Jean, the Florida State Department of Children and Family “determines that allegations of sexual abuse and sexual assault were verified with regards to one of the children who were under the former couple’s care for several years. The latter now resides in the United States.

A case in court

The Florida State Department of Children is the equivalent of the Haitian Institute of Social Welfare and Research. The structure encourages denunciations by telephone. For each incident, they conduct a meticulous investigation, followed by recommendations to the parents and to the justice system.

“We investigate abuse and neglect” explains patiently over the phone, Cassie, a representative of the institution, on a gloomy afternoon January 19. The information that triggered the investigation into Corrigan James Clay did not come from Shelley Jean, but Cassie refuses to disclose sensitive data protected by law.

It is difficult to determine the dynamic between the former couple who had four children when they divorced in 2014. When contacted by phone on May 18, 2021, Shelley Jean had difficulty cooperating. “The case is under investigation in the United States, so I am not allowed to discuss it”, she says before specifying that a judge ordered her to remain silent. “I can’t say anything.”

Shelley Jean also hides behind the justice system’s instructions to avoid indicating whether she was aware prior to these denunciations that the child was abused by their adoptive father. A few minutes after hanging up, she sends a definitive reaction via WhatsApp: “The children have always lived with me. [Corrigan James Clay] would leave with them on weekends, and see them on visits. Since I learned of the incidents last year, the children have lived 100% only with me”.

– Did you divorce Clay because of the sexual abuse he inflicted on the victim?

This message, which Shelley received, is still not answered.

For his part, the professional tattoo artist seemed to want to give his version of the facts. At first, he said on WhatsApp that he wanted the child’s permission to speak. Then, he adds that the mother would have to give her consent. “I don’t want my child to be hurt by becoming the focus of a newspaper article” he says before sending a UNICEF guide on how to report responsibly when children are at the heart of the matter.

“Neither I, nor Shelly gave you permission. It would be unethical and a journalistic mistake to publish this text” Clay wrote. He did not react to the clarifications explaining that the article would preferably focus on his crimes, and not on the child victim and that measures would be taken to avoid identifying this child, including their sex.

Relatives wall up in silence

Relatives of Jean and Clay refuse to take a public stand regarding this matter. Callie Himsl is American. She co-founded with the former couple in 2013 a company called “Papillon Marketplace”. The organisation’s mission is to fight the phenomenon of orphanages by giving work in the craft industry to Haitians in need, to enable them to care for their offspring.

“I resigned from Papillon on May 10, 2018 and haven’t spoken to Shelley or her family since” says Himsl. I wish you good luck in bringing light and justice to this matter. Himsl, who says he knows little about the matter, did not indicate whether knowledge of the abuse was one of the factors leading to his departure from Papillon.

At least two acquaintances of Shelley Jean in Haiti, applaud the work of Papillon Marketplace which created employment for several Haitians, including former “deportees from the United States”. Shelley uses Facebook to promote the company, but also to discuss more private matters. She also mentioned the case on social network, without however specifically naming the aggressor, who in fact is her former spouse.

James Corrigan Clay prefers to express himself on his blog, “Losing your biological family is a huge stress for a child and living in an orphanage is a trauma, even when it’s a good orphanage, because it’s never the kind of family you have lost”, he wrote in February 2017. “If the world were fair, Haitian children would have no less of a chance of survival than American or Canadian children. Families would not have to be divided for a child to receive the medical care they need”.

The biological father of the abused child is in good health in Haiti.

The 9-year-old tries to kill 3 people. His relatives in Haiti refuse to believe he has a problem. #HaitiBeat