(RNS)—  The Rev. Dieufort Fleurissaint, chair of Haitian Americans United, a Boston area non-profit, said he is thankful for God’s presence during this holiday season, even if the crisis in his homeland of Haiti is never far from his mind.
The situation in the Caribbean nation of 11.5 million people has deteriorated drastically in the past year, with the 2021 assassination of President Jovenel Moïse exacerbating the effects of a series of natural disasters.
The violence in Haiti made headlines in 2021, after the president’s assassination in July and the kidnapping of 17 American missionaries in October. More recently, the United Nations has made a number of dire pronouncements warning of gang violence and an outbreak of cholera.
Fuel shortages have further paralyzed schools and businesses, leaving many stuck at home, unable to work or obtained needed supplies for daily life.
“The situation in Haiti has been dire for many years,” said Fleurissaint. “In 2022, with widespread kidnappings, killings, fuel shortages and food shortages — the situation has worsened.”
Fleurissaint worries that few people are paying attention, saying that news coverage has been sparse. 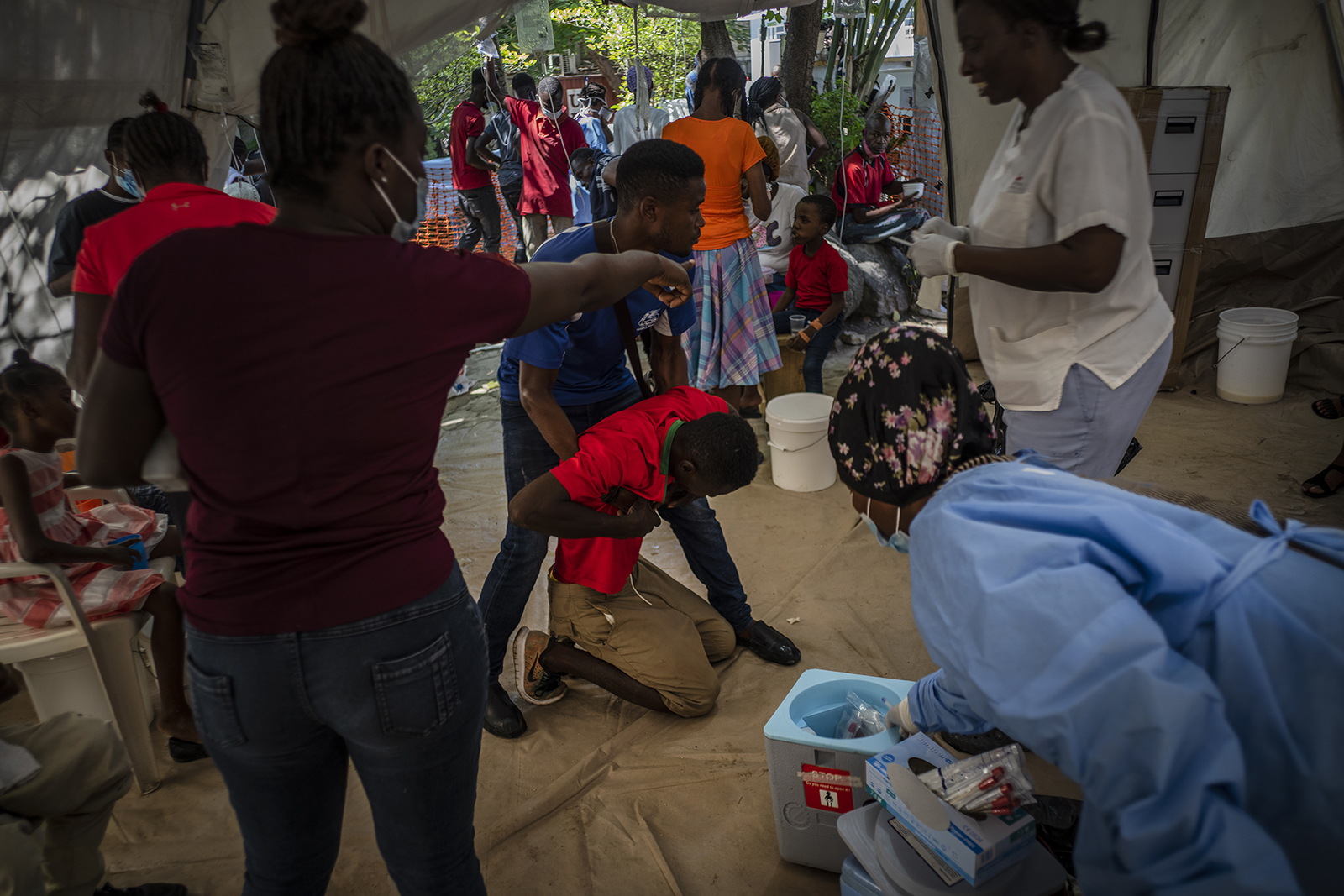 A youth suffering from cholera symptoms is helped upon arrival at a clinic run by Doctors Without Borders in Port-au-Prince, Haiti, Thursday, Oct. 27, 2022. For the first time in three years, people in Haiti have been dying of cholera, raising concerns about a potentially fast-spreading scenario and reviving memories of an epidemic that killed nearly 10,000 people a decade ago. (AP Photo/Ramon Espinosa)
Haitians in the United States and other countries routinely send money and other support home to relatives and family members unable to make a living. “The brunt of the responsibility falls on the diaspora,” he said. “We have to send money to loved ones, family and friends.”
A number of high-profile charities, such as Catholic Relief Services, Doctors Without Borders and World Vision, are active in the country, but Fleurissaint said that action is needed from outside governments as well.
The Biden administration recently extended Temporary Protected Status for some Haitians currently in the United States, but that status does not apply to Haitians who entered the country after November 6, 2022.
“We are providing much-needed humanitarian relief to Haitian nationals already present in the United States,” Secretary of Homeland Security Alejandro N. Mayorkas announced in early December. “The conditions in Haiti, including socioeconomic challenges, political instability, and gang violence and crime — aggravated by environmental disaster — compelled the humanitarian relief we are providing today.”
Fleurissaint said he and other Haitian American leaders have met with members of Congress and other leaders in Washington, pressing them to do more for Haiti. He said he opposes military intervention, saying leaders there should instead be given more resources and training to restore order. Children sleep on the floor of a school turned into a shelter after they were forced to leave their homes in Cite Soleil due to clashes between armed gangs, in Port-au-Prince, Haiti, Saturday, July 23, 2022. (AP Photo/Odelyn Joseph)
He urged his fellow Christians and other Americans to call their elected officials, citing direct pressure as the only way to put the crisis on their radar, he said.
Fleurissaint said that faith sustains many Haitians during this crisis.
“No matter what, we know where our strength comes from,” he said.
Lesly Michaud, senior operations director in Haiti for World Vision, the evangelical Christian charity, said the cholera outbreak, which has sickened more than 1,400 people and killed more than 300 since October, has aggravated the already desperate situation.

INTERPOL apprehends member of 400 Mawozo gang in the … – Dominican Today