By G. Dunkel posted on September 1, 2022
August 22 is the day the Haitian revolution began in 1791. The date commemorates the fact that an enslaved people, a majority of whom were born in Africa, organized an army that defeated the highly praised, veteran French military, on the battlefields of Vertières and elsewhere — giving the oppressed of this world a mighty example of successful struggle.
Every Haitian is aware of the significance of this date, which is why Pitit Desalin (PD), a small, anti-imperialist party based in Cap-Haïtien, the second largest city in Haiti, picked it for a demonstration against the high prices of fuel and food and against gang violence.
Massive August 22 demonstration in Cap-Haïtien.
Ariel Henry, the de facto prime minister who is running the government — whatever is left of it after the assassination of President Jovenel Moïse last year — left for a conference on agricultural production in Trinidad Aug. 18. He didn’t see the need to stay around for demonstrations calling for his resignation. Le Nouvelliste, the only daily paper in Haiti, put its main emphasis on an interview with the head of Haiti’s national bank on the relations between the dollar and the gourde, Haiti’s currency.
Turnout in Cap-Haïtien
Moïse Jean-Charles and other leaders of PD had spoken repeatedly over the radio in Cap-Haïtien in the weeks before Aug. 22 and had a stage constructed for its activity in the square that honors the heroes of the battle of Vertières.
On Aug. 22, PD led a number of marches from different neighborhoods to the Vertières monument. When Moïse Jean-Charles spoke about how the Haitian banks manipulate the exchange rate between the gourde and the dollar — 20% of Haiti’s GDP comes from remittances in U.S. dollars — the huge crowd responded with “N ap Boule yo!” which can be translated as: “We will burn them!”
The crowd opposed Prime Minister Henry, characterized as a tool of the United States and the other big imperialist powers who make up the Core Group, according to Le Nouvelliste. The paper called Aug. 22 a “crazy day,” pointing out that the crowd was waving Russian and Chinese flags and scorning the Stars and Stripes.
The whole country is suffering from a sharp decline in living standards, the increased price of food and gasoline, and the absence of any security. There were demonstrations throughout the country.
Shortly after daybreak on Aug. 22, barricades of burning tires and boulders went up on the main roads in Port-au-Prince, the capital of Haiti, as well as in Jacmel and in les Cayes, two big provincial cities. There was a remarkably large protest in Petit-Goâve, a small seaside town of 12,000 in Haiti’s southwest. The provincial cities of Jacmel, Miragoâne and les Cayes et les Nippes all extended their popular mobilizations to Aug. 23.
The anger of the masses in Haiti is palpable. The real question is how they can push the struggle forward in a small country under immense pressure from imperialist sharks. 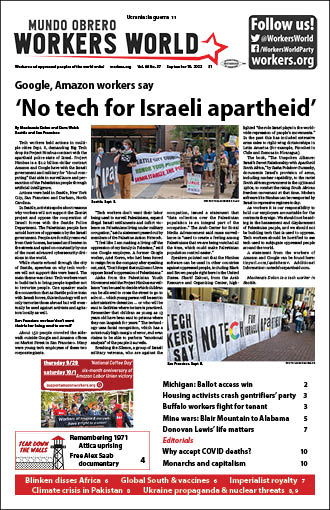 Haitian soldiers to be trained in Central America – Jamaica Gleaner