By G. Dunkel posted on February 2, 2022
Former Haitian senator Moïse Jean Charles, was deported to Haiti from Miami, Jan. 25
The last week of January, two moderately severe earthquakes shook southwest Haiti in the department of Nippes. An official said 191 homes were destroyed, and 591 were damaged. At least two people were killed. Dozens of people were injured and had to go to the hospital, including a number of students in school at the time.
The AP reported Jan. 25, “People are scared to go back into their homes.” These earthquakes were aftershocks from a far more intense earthquake that hit the same area Aug. 14, killing more than 2,200 people and damaging or destroying some 137,500 homes.
Nippes is still recovering from the August earthquake. The U.N. estimates that 800,000 people lost either their home or what they needed to make a living. Farmers lost their fields, and fishers lost their docks, boats and drying racks.
The assassination of President Jovenel Moïse in July 2021 added to the political instability in Haiti, further aggravated by social violence coming from heavily armed individuals concentrated in the drug trade. The political situation has brought famine and fear, with 43% of the Haitian people, according to the U.N.’s Food and Agricultural Organization, suffering from food insecurity — they regularly don’t get enough calories. (tinyurl.com/yc587sf5)
While there are no official statistics on hungry Haitians fleeing to other Caribbean countries, there are anecdotal reports of 1,000 being rounded up in the Bahamas, camps being closed in Jamaica and many Haitians being arrested in the Dominican Republic. The U.S. Coast Guard has made two intercepts this year, one of 88 people and the other of 179 people, and two groups of Haitians managed to make landings in the Florida Keys in December 2021.
Political maneuvering
President Moïse didn’t hold elections when they were legally required, which meant the terms for most of the members of the Haitian parliament — as well as most local officials like mayors and city councilors — expired. This let him run Haiti by decree from January 2020 onward. His opponents said his term ended Feb. 7, 2021, but he claimed it went until Feb. 7, 2022.
Moïse named the current prime minister, Ariel Henry, two days before his assassination. Since Henry was appointed by Moïse, many Haitian lawyers feel his term should end when Moïse’s would have ended — Feb. 7, 2022.
The most probable solution to solving the problem of having no elected leaders, for the bourgeoisie, is to hold elections. (For Haiti’s workers and peasants, socialism would be a desirable solution, but that is not a legal option under the current pro-imperialist regime.)
The faction of the bourgeoisie around Henry has an election proposal called the “September 11th accord.” The opposition to Henry has put together a competing accord, named the “Montana Accord” after the hotel where the meeting founding this accord was held.
The Montana Accord has a very broad membership, which ranges from very progressive parties like Fanmi Lavalas and Dessalines Children (Piti Desalin) to the Haitian Party of Tèt Kale, to which the current prime minister belongs.
Both accords are competing to win the support of U.S. imperialism and its allies and have different conceptions of how to choose the council that will direct the country before the vote.
Deportation of Moïse Jean-Charles
Moïse Jean-Charles is a former Haitian senator and was the presidential candidate of Dessalines Children in 2015, running against Jovenel Moïse and Jude Célestin. He came in third with over 14% of the vote. He calls himself a “restorative socialist” and says he regards Fidel Castro as a role model.
When he was passing through the Miami airport on his way back to Haiti Jan. 24 from a trip to Nigeria, Charles was pulled out of line, interrogated for eight hours, mostly in Spanish, about a trip he took to Venezuela a few years ago. He was then arrested, jailed and deported back to Haiti. He is barred from the U.S. for five years.
When Haïti-Liberté asked him about why he was deported, and did he think it was related to what he was saying in Haiti, he replied “That may have contributed to what happened. Why? Because what’s happening in Haiti, it’s the Americans who are doing it. But they don’t want people to denounce them. I don’t understand that! It’s the Americans who are trying to put together people who fought in 2004 [during the violent coup against Jean-Bertrand Aristide]. The pro-coup sector (Grenn nan bounda), the Americans are making them sit together with the Lavalas. It’s the Americans who are doing things in Parliament with Youri Latortue, Joseph Lambert and Michel Martelly. It’s the Americans who are making Ariel do stupid things.” (tinyurl.com/ph72dbdr) 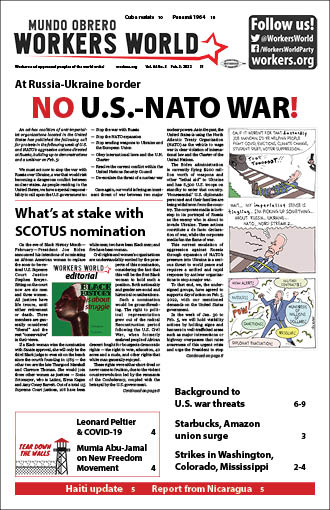 Feb. 3, 2022 issue
Past issues
What Road to Socialism?
PDF of January 27 issue
China welcomes Chinese translation of ‘Capitalism on a Ventilator’
Solution to global inequality is socialism!
PDF of January 20 issue
Letters from incarcerated readers: ‘A glimpse into my struggle’
One year after fascist attack: Capital and the Capitol