“As soon as the white people saw that Haitians were renting or buying houses close to theirs, they gradually moved away,” explains Sylvie Pognon. This small town had only 4,000 residents when the Haitians started to migrate

By two o’clock in the afternoon, we arrived in Mount Olive, a small town in North Carolina. The trip lasted an hour and took us to the heart of rural America, the farmers’ land or the one who votes Republican.

At random, we go to meet the Haitians because they seem to be many in this small city. And as fate intended, after more than an hour to turn in circles, we find ourselves in front of the Grace of God convenience store.

It’s open. It won’t close until nightfall. On the window that shows a bit of the interior, someone has put a Haitian flag, fixed with adhesive tape. That’s what caught our attention. Next to the bicolor, there are inscriptions in English and Creole. No face mask, no entry. This warning seems to be there because it must be. But we see that almost nobody in the store is paying attention. With their faces uncovered, customers get out of their cars, rush inside, do their shopping, and quickly leave, after having a short conversation in Creole with the store owner, Jaccius Clairmond.

The main street is in front of the store. A long railroad is there as a reminder that trains still run in this small town. The street is quiet. Shirtless children sit near a Latino store. Cars drive by every now and then, and most of the drivers are Black people. Not necessarily Haitian. Or they could be. 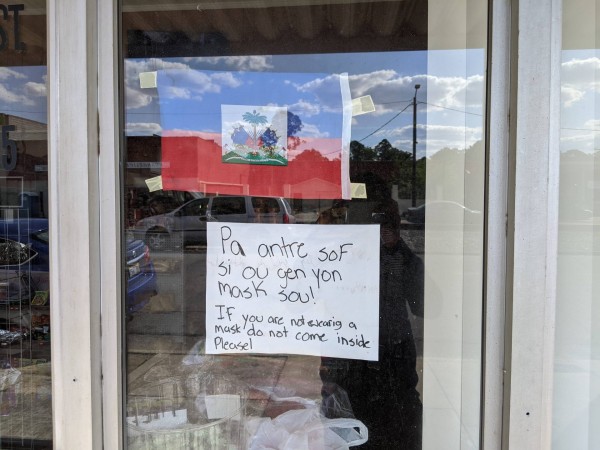 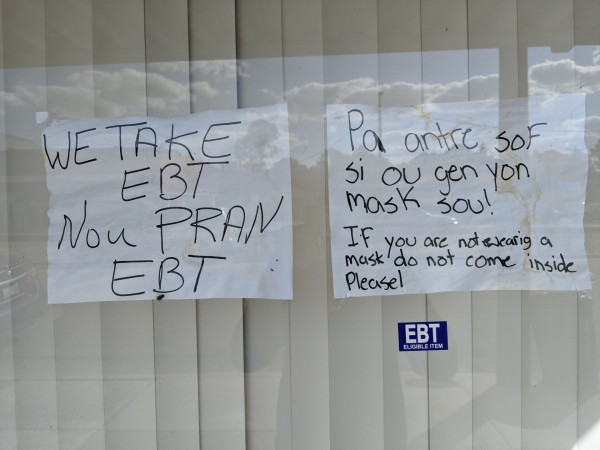 Inside Jaccius Clairmond’s store, security cameras scan the shelves. The owner is deep in a conversation with a customer who owes him 30 USD. ” I have already paid you back, case closed,” she replies. Clairmond is not convinced but lets it go. An old woman comes in, rummages through the shelves, and returns a minute later complaining that she can’t find potatoes for a “patat ak lèt”. A man asks for powdered djondjon, not cubed. We are not so far away.

Jaccius Clairmond opened his store two years ago. But a few years earlier, in 2010, he was in this same town in a three-room apartment with 34 other people. He had come from Florida to settle in this small shabby town. As opposed to many of his compatriots, he still lives there.

According to the U.S. Census Office, in 2010 there were approximately 4,000 people living in Mount Olive. And among those residents, there was not a single Haitian. That changed dramatically when more than 3,000 Haitian migrants arrived in the small town from one day to the next, with no warning.
Clairmond is part of the first group of migrants. The native of Limonade had been living in Florida since 2006.

There were only 11 Haitians who came to Mount Olive. There were no job opportunities in Florida, and the cost of living was high,” he says. A factory in Mount Olive that needed workers sent people there to be employed. The Americans didn’t want those jobs. I didn’t know anyone there, but I didn’t hesitate a moment to make the trip.”

The factory mentioned is Butterball LLC, a company that produces poultry, specifically turkeys. But the realtors’ touted conditions aren’t really accurate. “When we arrived, we were placed in a three-room apartment where there were already 24 other people living. We slept on the floor to the best of our ability.” 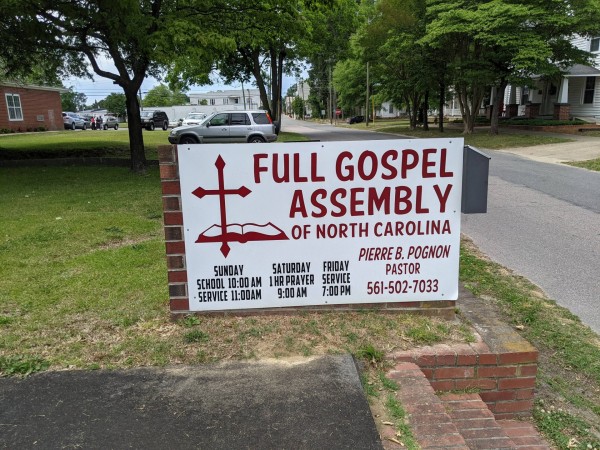 For two months, Jaccius Clairmond has been working at Butterball and living in this crowded house. He was paid 9 dollars an hour. Shortly after, this income will be adjusted to $10.87. It is a tough and dangerous job. He also left his wife and 12-year-old son in Florida, as did most of his peers.

A few months later, his wife joined him when he and two other friends decided to rent a new house together.

Later on, after these first eleven pioneers, the flow of migrants does not stop. They all come to look for work, at the Butterball factory or in other companies in the region that do the same type of work. But some of them have difficulty integrating.

Sylvie Pognon owns a thrift store on the main street where you can buy anything, including clothes, at affordable prices. She remembers those first moments, which she did not experience, but which her husband, Pastor Pierre Pogon, shared with her. Many of them did not speak English and could not communicate effectively. They did not have a car, in a city where you need one to get around. They carried their dirty clothes on their heads to the laundry. It was a difficult time.”

In any case, Haitian migrants have breathed life into the quiet, almost boring place that Mount Olive used to be. Before the Haitians, in the 2000s, Latinos had come here for the same purpose. But they soon left, as they were unwelcomed. For the Haitians, it was different. We were very well received,” says Jaccius Clairmond. People helped us, especially when the other groups of Haitians arrived.

A few years later, in 2021, the situation has changed. Many Haitians have left. “Mount Olive was the first place where Haitians settled in North Carolina,” explains Sylvie Pognon, “but they soon left for other major cities because they received better salaries. “

Those who remain no longer really constitute a community. “To find a group of two Haitians, you have to go to church on Sunday. That’s the only place where there is a gathering. We don’t have anything that brings us together, like a party, not even the celebration of the flag.

In addition, rents have increased, and Sylvie Pognon believes that Haitians are the main responsible. It’s also one of the reasons why they went elsewhere. “In 2012, for example, rents were low. You could buy a house for $70,000, even if there were repairs to be made. Now, that’s not possible.”

Although no longer in Haiti, some bad behaviors are still visible among compatriots, making the idea of community even less possible It’s sad, but I have clients who have debts and refuse to pay,” says Jaccius Clairmond. They prefer to choose not to talk to me than pay their dues. This store requires a lot of money. I buy my products in Florida, and the cost to get there and back is expensive. Every quarter I pay at least $1,000 in taxes. But they don’t seem to understand that.”

Things almost changed when young Haitian men from Florida started to get involved in delinquency in Mount Olive. At first, the parents came alone, and their children lived in Florida,” says Jaccius Clairmond. But when their life situation improved, the kids came. Or some came because they had friends here. Some of them were into stealing, and they were doing it to the detriment of their Haitian compatriots.”

The way Haitians are perceived has started to change because of these young people. When we came here, some neighborhoods didn’t have enough police workers,” says Sylvie Pognon. But when these young people started doing these actions, reinforcements arrived. I remember they kidnapped a Haitian lady. They took her credit cards and emptied them. They robbed her house. It was horrible.

Most were arrested or deported to Haiti, and the rest fled the city. But the way other Mount Olive residents view Haitians has begun to change. ” Moreover, even if it doesn’t look like it, there is racism. As soon as the white people saw that Haitians were renting or buying houses close to theirs, they gradually moved away.”

This article is part of AyiboPost’s exploration of Haitian migration. Click HERE to read the reports, expert perspectives and watch the documentaries.

Haiti ranked 173 out of 180 in environment management – Haitian Times