The palm kale is eaten in Haiti but consumers attach little importance to the regeneration of the tree.

The local palm tree is the only one to produce edible cabbage.

The chief head of plant production at the Ministry of Agriculture, Natural Resources and Rural Development reports that there has not yet been a census to enumerate the quantity of palm trees existing in Haiti.

The local palm is a tree of the palm family which includes the coconut palm, the date palm, etc.

The tree, present in the Haitian bicolored flag, can measure up to 12 meters in height. It includes a terminal bud called palm kale or palm heart. This “cabbage” is very popular in the gastronomy of the country.

Originally from Les Cayes, Claudette Jocelyn lives in a community located in the hills not far from the town of Saint-Jean du Sud.

The farmer living from agriculture proclaims her passion for the delicious vegetable made from palm kale. “It doesn’t happen often enough, but I’m used to eating it with joy” she says.

Traditionally, palm kale is consumed much more during the Easter period. “I don’t know about the other regions of the country, but in the North the consumption of palm kale also called heart of palm, is a very widespread practice among farmers” reveals the agronomist Emmanuel Jean Louis, MARNDR executive and manager of plant protection in the north of the country.

Raw or cooked, palm kale is a key ingredient in a truly exquisite dish. The tree is also used for other purposes. In some communal sections, palm wood is often one of the materials used in wooden frames and posts in small houses.

“The walls of these shelters are made of palm kernel weavings” continues the agronomist. “Very often, the consumption of palm kale is done by the same farmer who cuts down the tree for construction. In this sense, it is rare to see the heart of palm in the markets”. 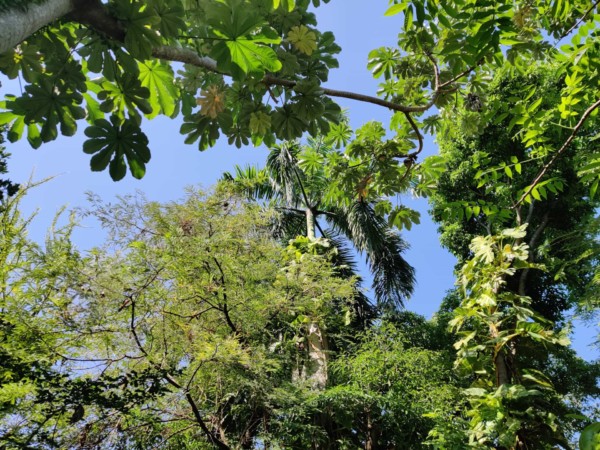 There is the chili palm, the saw palmetto which is a decorative shrub and the royal palm of the West Indies. The latter, by its scientific name Roystonea regia, is that which appears among the coat of arms of the republic. It remains a native variety unique to Haiti, according to Clervéus.

The palm tree is a plant that lives with a single meristem, the bud allowing the production of leaves. “In the case of the palm kernel, it is the cabbage that represents its meristem. Its removal practically puts an end to the plant’s survival” says geneticist Gaël Pressoir.

The growth of the palm kernel in many parts of the country is mainly due to the dispersal of seeds by birds. This is called natural regeneration.

There was a time when most farmers did not welcome the presence of a palm kernel around their garden.

“It’s a tree that attracts birds. Some planters cut them down to ward off birds that could devastate their garden” says agronomist Emmanuel Jean Louis. It is especially at this time that people remove the cabbage.

Since the palm kernel has no market value, farmers attach little importance to this plant. “The palm kernel does not have the same importance as a coconut palm in the eyes of the farmers” relates the agronomist Emmanuel Jean Louis.

Cutting down the country’s palm trees is not necessarily a bad idea. “There is a way to do it” says the agronomist Gaël Pressoir. Every tree has a middle age. The bottom line is that you have to plant it constantly” he says.

After a year and a half, the young palm kernel will already have a cabbage suitable for consumption and of commercial size. “I have already visited palm kernel plantations in Costa Rica” Pressoir continues. “Costa Rican planters choose a relatively fast growing palm for the production of kale”.

The palm kernel surmounted by the Phrygian cap is one of the constituent elements of the republic’s coat of arms. According to historian Jean Ledan Fils, the palm kernel symbol in the Haitian flag represents the guardian of the national territory.

The palm kernel also has a sacred value. “It is present in Haitian voodoo and symbolized in the “vèvè” illustrating the “lwa Ayizan”, explains the historian. The palm kernel leaf is also used during the Easter period. Catholics carry branches (palm leaves) which, once blessed, are held in the hands of a procession of believers as they set out.

At the same time, the writer Odette Roy Fombrun writes in her work: “Flag and Arms of the Republic of Haiti” that the palm kernel surmounted by the Phrygian cap symbolizes freedom.

Despite a certain symbolism, no public policy seeks to bring awareness to this tree. “The State should declare the palm kernel a symbolic tree on the Haitian territory” suggests agronomist Emmanuel Jean Louis.

The head of plant protection in the North says that the palm kernel was not even talked about during his training at the Faculty of Agronomy and Veterinary Medicine.

The prisons in Haiti are horrible. For women, it’s hell. #HaitiBeat