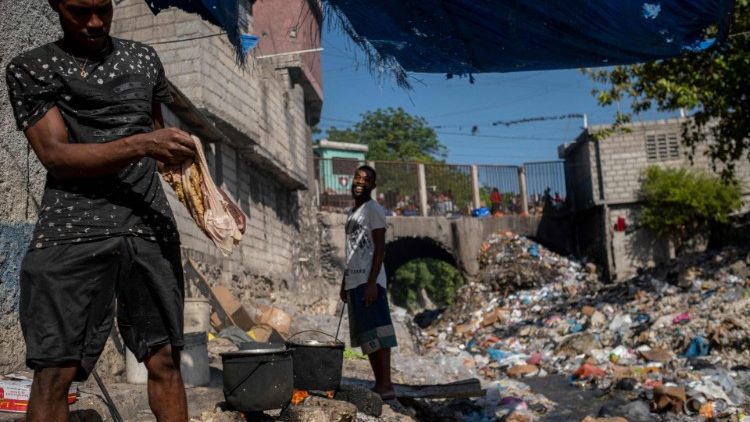 HAITI: Ahead of the end of the current presidential term in Haiti, Haitian Bishops have released a statement calling for unity to overcome the ongoing political and socio-economic crisis in the Caribbean nation.
Monday, 7 February, marked what would have been the end of the late President Jovenel Moïse’s term in office, had he not been assassinated during an armed attack at his residence in Port-au-Prince on 7 July 2021.
Insecurity has continued to increase since, with growing violence and kidnappings by armed gangs, while a 7.2-magnitude earthquake in August claiming over one thousand lives has plunged the population into further poverty.
Political tensions also continue to run high, with opponents to the current Haitian Prime Minister, Ariel Henry, challenging his authority and demanding his immediate departure.

Haitian people are ‘exhausted’
In their statement, the Haitian Bishops emphasize the urgent need for “courageous decisions” at this difficult time, recalling that the present and the future of Haiti, and therefore its “very existence as a people, as a nation, and as a state are at stake.”
“The Haitian people cannot take it anymore. They are tired and exhausted of alienating, humiliating, inhuman, dehumanizing living conditions,” they write.
This is no time, they continue, “for division, disunity, disagreement, discord and fratricidal struggles for power, for the unchecked and shameless pursuit of personal, selfish, and petty interests.”
Instead, the Bishops appeal for unity and call on all political leaders to seek the “the widest consensus possible” so as to definitely exit the crisis.

“The time has come for unity, which is strength, to pool our ideas and our efforts, for national and patriotic consensus to get our country out of the deep crisis that has been going on for too long threatening its very existence.”

On the edge of an abyss
Referring to Monday’s crucial date marking the end of the original presidential term in office, the Bishops call on all Haitians to “work together so that 7 February is a day of dialogue, of consensus, and of historic compromise aimed at unifying our people, and of saving and transforming our country, which is on the edge of an abyss.”

Restoring order, peace, and security
The Bishops address themselves specifically to political leaders, asking that they “do everything possible to ensure that order, peace, security and respect for lives and property are largely restored.”
But they also refer to the armed gangs sowing death and fear across the island, urging them “to lay down their arms, to give up violence and kidnapping and to stop shedding the blood of our sisters and brothers.”
Finally, the Haitian Bishops implore the Blessed Virgin Mary’s help so as to save the Haitian people from even worse predicaments.—Vatican News
St. Apollonia of Alexandria
1 Kings 10:1-10
Psalms 37:5-6, 30-31, 39-40
Mark 7:14-23
Lord, let Your Word always be in our hearts

Migrants, including Haitians, evicted from camp in Tijuana – Haitian Times