By G. Dunkel posted on July 25, 2022
In the current situation in Haiti, organized groups — invariably called gangs by the bourgeois media — often have more and heavier weapons than the Haitian cops. Some of these “gangs” were created to profit from extortion and kidnapping, like the “400 Mawozo” who grabbed 17 missionaries in December 2021 for ransom.
In line for water in Cite Soleil, a community in Port-au-Prince
In reaction, other “gangs” have been organized to defend their neighborhoods. These groups are generally neighborhood based and are known to handle neighborhood problems, like trash pickup. In essence, they exercise a local authority that comes close to replacing the authority of the Haitian state, especially in poor and working-class neighborhoods.
Nationally, Fanmi Lavalas, a political party led by former President Jean-Bertrand Aristide, was able to call hundreds of thousands of protesters into the streets throughout the country in a June 26 protest.
Since the one-year anniversary of President Jovenel Moïse’s assassination July 7, two coalitions of “gangs” have been contending with deadly force as to which will control Cité Soleil, a large, very impoverished community in Port-au-Prince, where Haiti’s largest fuel depot for gasoline and diesel is located.
One of these coalitions is called the “Revolutionary Forces of the G9 Family and Allies, Mess With One, You Mess With All,” which is generally shortened to G-9. This is led by an ex-cop, Jimmy Chérizier, known as “Barbecue” because of his family’s business. The other coalition is called G-Pèp and is run by Gabriel Jean-Pierre, also known as “Ti Gabriel.”
G-Pèp is funded by and politically aligned with Réginald Boulos, a member of Haiti’s big bourgeoisie, who helped organize two coups against Aristide and who has close ties to the U.S., where he was born.
The fighting between G-9 and G-Pèp has been very heavy. Hundreds of people have died or been wounded, thousands have fled their homes. People in neighborhoods in the areas where the fighting has been most intense have been afraid to leave their homes. People have gone hungry and run out of water.
As of July 24, it appears there is a ceasefire in effect; since at the Varreux Terminal in Cité Soleil, operators reported on Twitter that they had filled 129 tanker delivery trucks on July 21.
The U.S. opposed a strict U.N. embargo on allowing weapons to go to Haiti, even though the U.N. officially estimates that 270,000 weapons, mostly from the U.S., are in Haiti.
Food and water
The U.N. World Food Program Country Director Jean-Martin Bauer, in a series of tweets July 19, explained how the WFP delivers aid to the 4.5 million Haitians — nearly half the population — now at risk of famine.
The WFP can’t use Port-au-Prince as a distribution hub, since “criminal groups block the roads leading to Port-au-Prince,” so it uses its ship “the Linda D [to] safely transport humanitarian trucks and cargo.” Once the ship reaches a port, it uses its cranes to unload an entire truck and to pick up an empty.
For over a year, criminal “groups” have blocked normal commerce, the regular transport of goods, services and people between Port-au-Prince and the rest of the country, particularly with the southern peninsula where much food is produced.
The U.N. estimated Haiti’s overall inflation rate is 25%. Before the Ukrainian conflict, Haiti imported 80% of its cereals, so the WFP predicts that now the cost of food in Haiti will be even more inflated.
Reparations and the roots of Haiti’s poverty
Restitution and Reparations for Haiti
Haiti is the poorest country in the Western Hemisphere. Its poverty was imposed in 1825. That year a French fleet showed up off Haiti’s coast to demand the country pay France for the loss of its most valuable colony that had contributed half of France’s income, in particular the loss of its most valuable asset in that colony — enslaved people.
France “lost” this colony when Haiti’s people rebelled, fought France in a war of independence and declared Haitian sovereignty in 1804.
France wanted compensation for what the Haitian revolution won with the blood of its people. It wanted 150 million gold francs, 10 times the price it got from the United States for the Louisiana Purchase.
The New York Times, in its May 28 “Ransom” project, carefully documented how the debt imposed by France in 1825 forced Haiti to borrow from French banks, how the debt ballooned many times over because of interest and how U.S. banks took over that debt.
Haitian economists estimate that Haiti now deserves $20 billion to $30 billion in reparations for this injustice. 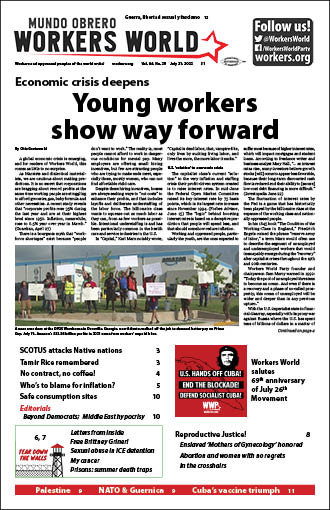