Minister of Youth, Culture & Sport Dr Ernest Peets and representatives of both the Somerset and St. George’s Cricket Clubs gathered at the Cabinet Grounds, addressing the upcoming Cup Match holiday and supporting the presentation of a Haitian flag in commemoration of emancipation on August 1, 1834.
Minister Peets said, “I am pleased to be here to support the presentation of the Haitian flag to the Somerset Cricket Club. This occasion affords us the opportunity to highlight the connections between Haiti, Bermuda and other countries where people of the African diaspora were enslaved.
“The Haitian Revolution in 1804, proved to be a tipping point in ending the system of slavery in Bermuda and other British jurisdictions in 1834. Haiti is a proud nation, steeped in a rich history. It is the world’s oldest Black republic and is connected with Caricom, alongside Bermuda.
“Cup Match is such a special and exciting time of the year for us. So, it is gratifying that we can take a moment from our busyness and preparations to support this important recognition of history.” 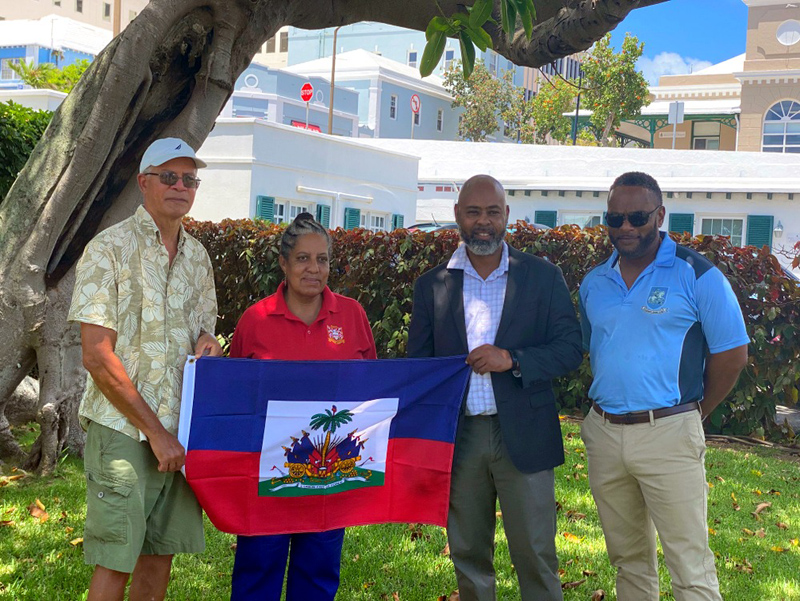 A spokesperson said, “Glenn Fubler of Imagine Bermuda thanked the Minister, pointing out that the significance of emancipation – the liberation of some 800,000 enslaved people across the British Empire – could be appreciated in the context of the vista that we shared. The building across Front Street from the Cabinet was the ground zero of the Enterprise story, just six months following that August 1, 1834 milestone.
“It was in that space that the Supreme Court special hearing took place, a legal action initiated by formerly enslaved Bermudians, which freed 72 men, women and children that had to that date had been held, in slavery on the U.S. ship ‘Enterprise’.
“Fubler went on to note that a full context of the role of Haiti can be found in the book Prudent Rebels- Bermudians and the first Age of Revolution, which was co-authored by Dr Clarence Maxwell. It was worth noting the Haitian success resulted in centuries of punishment of that island nation by global elites who had benefited from slavery.
“This included embargoes, invasions, coups and imposed massive debt for the ‘loss of property’; details of this have been recently highlighted by the NY Times.
“The media was informed that the National Museum of Bermuda will fly the Haitian flag up until August 1st in fulfilling its mandate to foster awareness of our shared legacy.
“In addition, the public was invited to join the West End Ministerial Association in an ecumenical pre-Cup Match service at the Somerset Field on Sunday, July 24 at 8.00am, where the theme is ‘Unity in the Community’ and a peace tree will be presented.
“The Secretary of SCC – Dawn Simmons – expressed her club’s pleasure in fostering appreciation for those who facilitated emancipation and the role of the Haitian legacy. Damon Walker – member of the St. George CC executive – shared his club’s support for this act of solidarity.”

For extensive coverage of Cup Match spanning over a decade, visit our website BernewsCupMatch.com, the island’s most comprehensive resource on the Cup Match holiday.