MIAMI, Florida – Next month the Haitian Women’s National Team will attempt to become just the second Caribbean nation to qualify for a Senior Women’s World Cup when they take part in the Inter-Confederation Playoffs for the 2023 FIFA Women’s World Cup in Australia/New Zealand.
Many of the current Haiti players have been part of a years-long process that saw the nation qualify for the 2018 FIFA Under-20 Women’s World Cup, the first time that a Haitian Women’s National Team qualified for a World Cup at any age level.
But a recent new addition to the squad has also provided a tremendous boost. It comes in the form of center back Claire Constant, who made her Haiti debut last summer in a pair of friendlies prior to the 2022 Concacaf W Championship in Monterrey.
Born and raised in the United States to a U.S. mother and a Haitian father, the former University of Virginia player recounted how she quickly became a key piece in Haiti’s Women’s World Cup quest.
“I always thought in the back of my mind that Haiti was a possibility since going to play in my first USA youth camp and seeing other youth players who have dual citizenship, but I didn’t have my dual citizenship at the time. In early April I was reached out to by someone in the Haitian federation and they said, ‘We know your father is Haitian, we want you to come play for us,’” said Constant in an exclusive interview with Concacaf.com.
“We looked at all the rules and figured everything out, and I was eligible to play. It was a process to get the passport and figure all of that out. We started that process in April and by the summer I was able to play for Haiti,” added Constant.
Joining a team that already boasted a strong core with the likes of Melchie Durmornay, Nerilia Mondesir and Roselord Borgella and others was always going to be tricky. Adding to the difficulty was that there was a language barrier. However, the warm nature of the Haiti squad made it an easy adjustment for Constant.
“It was a huge honor just to be able to play with all these great players. They have been playing together for a while, they have a routine, so going into it I was nervous. I just decided to keep my head down and do what I do, which is play center back and use my voice. But that’s the thing, there is a language barrier. The coaching staff speaks French, the girls speak Creole and French. I had taken French for about seven years, but it’s not strong and I only know a few Creole words, but we worked together. The girls welcomed me in,” said Constant.
After two friendlies against Costa Rica, Constant and Haiti started their CWC campaign in Monterrey. The lessons learned in an opening 3-0 loss to the United States paved the way for a 3-0 win against Mexico in the second match before closing with a defeat to Jamaica, earning Haiti a Third-Place finish in the group and a place in the Inter-Confederation Playoffs. 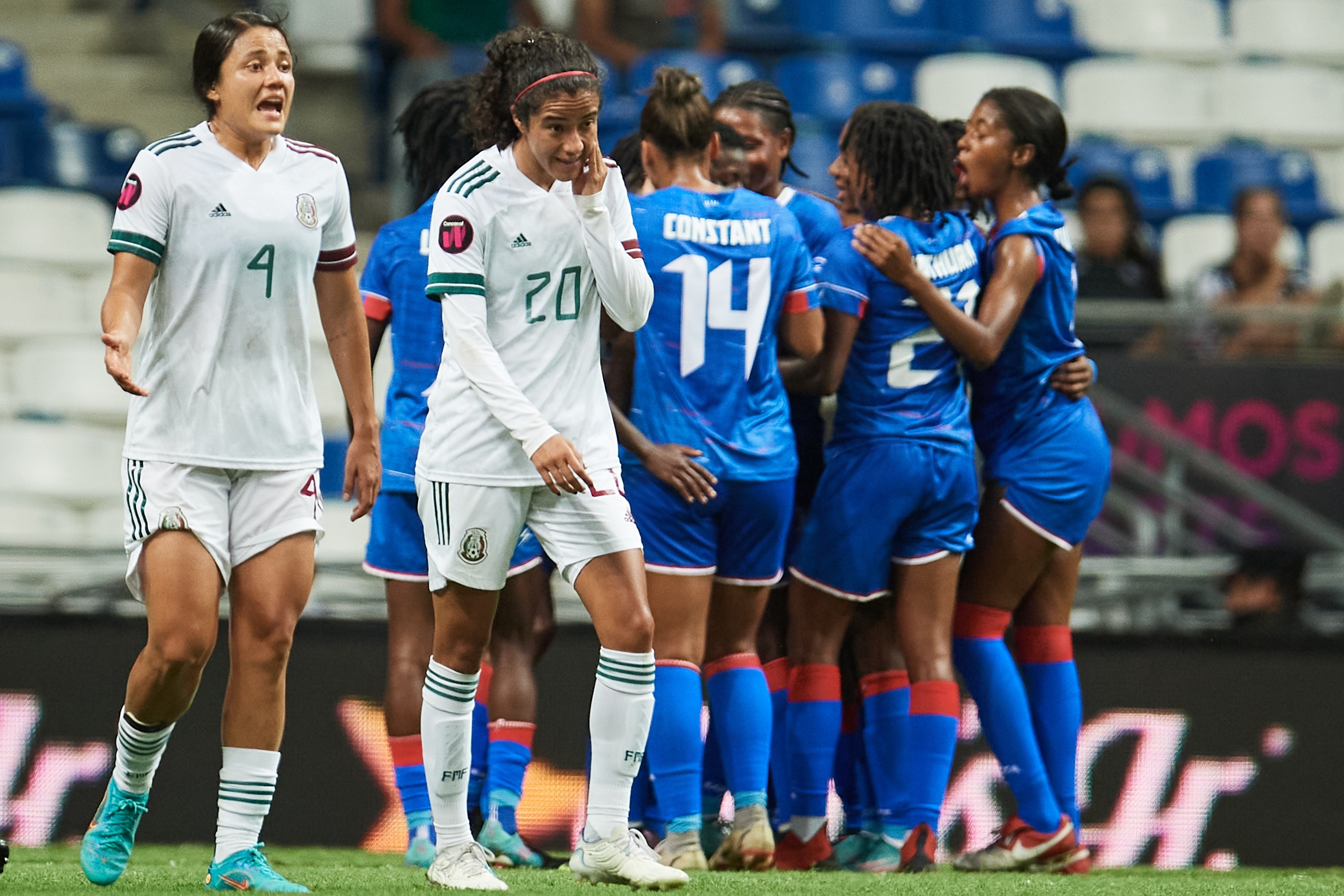 Claire Constant #14 and her teammates from Haiti celebrate after scoring against Mexico at Estadio BBVA Bancomer on July 7, 2022.
“I was proud with how we played in the U.S. game, despite it being a 3-0 loss. We grew from that and I think we went into the Mexico game super strong. We had a set goal as a team for the Mexico game, we knew what we wanted to do and we did that. In the third game against Jamaica our lack of cohesion showed a little bit,” said Constant.
While Constant was focused on delivering three strong performances in Monterrey, she did allow herself to opportunity to look around and soak up the moment of representing Haiti on the international stage. It is a feeling she will never forget.
“I remember the first time walking out. I was in the starting lineup, we walk out and we have the flags and I was overwhelmed with emotion. I still felt all those nerves and everything while singing the anthem, but it was more passion and excitement for the country and just being excited to wear the Haitian crest on my chest.
“When I hear the Haitian National Anthem, I know that I am playing for something bigger than myself. I know that I’m playing for a country that is struggling right now. I grew up very blessed, so for me to get the opportunity to represent Haiti, I felt such great gratitude,” said Constant.
It was also a memorable moment for her parents in Monterrey, especially for Constant’s Haitian father, who received the gift of a lifetime after the tournament.
“I’m just so grateful that I have parents who can come and support me in that way. My dad loves soccer, he was my first ever soccer coach. This whole process has brought us a lot closer. We got to keep our jerseys after the Monterrey tournament and his birthday was in July, so for that I gave him my jerseys,” said Constant.
Constant and Haiti open the Inter-Confederation Playoffs against Senegal next month and with a victory, they would take on Chile for a spot in the Women’s World Cup. Just two wins separate the island nation from reaching the pinnacle in women’s football, and the significance of such an achievement would have a major impact back home in Haiti.
Le tirage au sort de la 9e édition du mondial féminin de la FIFA aura lieu ce samedi 22 octobre 2022 à AOTEA CENTRE THÉÂTRAL de la ville d’Auckland en Nouvelle Zélande à 19h30, heure locale, 2h30 du matin en Haïti.39 pays (29 qualifiés +10 barragistes ) y seront représentés. pic.twitter.com/fsfmKFPINS
“Qualifying for the World Cup would bring hope. A lot of these girls on the team grew up in Haiti, they came from very little. There are so many people watching and supporting us and rooting for us, so it would mean the world to the country and for women’s soccer for us to qualify,” concluded Constant.