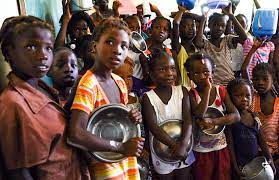 PORT AU PRINCE, Haiti – Almost half the population of Haiti is currently experiencing high levels of acute food insecurity.
This is based on the latest analysis which shows a  major deterioration of the food crisis in Haiti with 4.7 million people, almost half of the population, experiencing high levels of acute food insecurity.
According to Plan International, a global child rights organization, Haiti is one of the hungriest countries on earth, and women and girls are bearing the brunt of it.
In commenting on the crisis, Plan International’s Programme Specialist,  Anaëlle Canez, said since July of this year, Plan International has been responding to the hunger crisis in the south-east department of Haiti, but the ongoing violence and fuel shortages in the country have made access difficult.
“Our main concern is focused on women and girls. Not only are we challenged with getting enough funds to provide food and other crucial elements, but with the current crisis in the country, it is almost impossible to move around. The fuel shortages and daily violence are affecting how and where we can work and urgent supplies are not getting where they should be. In the end, it is the women and girls who pay the price,” she noted.
Recent research by Plan International on the impact of the hunger crisis on women and girls in communities in Haiti’s southeast found evidence of discrimination against them. Including often receiving less food than men and boys.
The research shows that on average, women in 87 percent of households receive a lower food ration than men, compared with 12 percent of women who receive the most.
Girls in 58 percent of households receive a lower food ration than boys.
The hunger crisis has also forced some girls to engage in sexual activities in exchange for food or money.
This has directly resulted in numerous cases of unwanted and early pregnancies, according to the research.
In addition, a recent cholera outbreak has hit the country hard.
The infection is caused by the ingestion of food or water contaminated with bacteria and can kill within hours if left untreated.
Officials at Plan International have said that the organization is preparing work aligned with the government’s response to the outbreak, which will include the distribution of hygiene kits to communities and raising awareness in communities on preventative measures.
Plan International will also develop a radio spot for awareness raising in communities.
The last major outbreak in Haiti was in 2010 when nearly 10,000 people died. It’s estimated there are globally 1.3 to 4 million cases and 21,000 to 143,000 deaths each year due to cholera.
This year is especially concerning as the World Health Organization has said that there is a shortage of cholera vaccines due to a rise in global cases. CMC