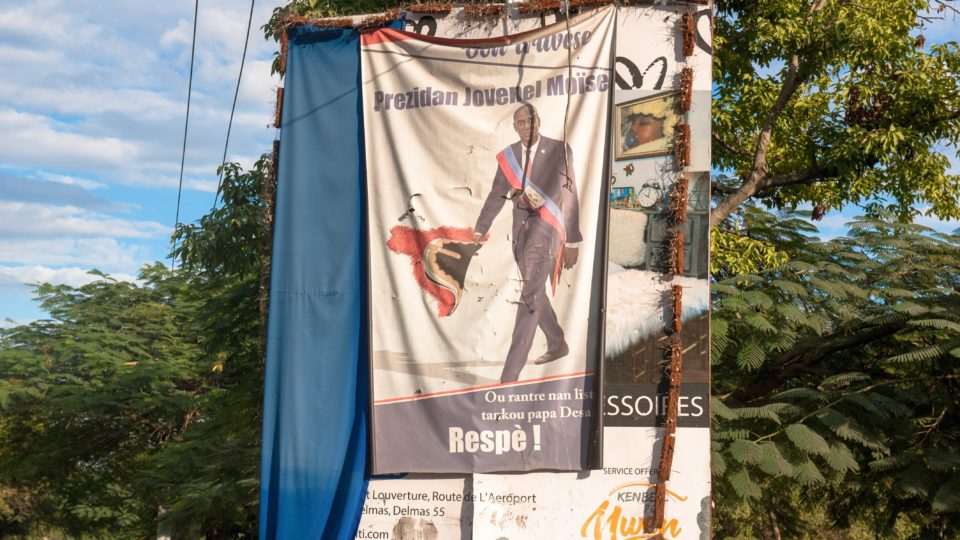 Flag with photo of the President of Haiti, Jovenel Moise, assassinated in July 2021.| Photo: EFE/Johnson Sabin
Jamaican police on Saturday arrested former Haitian senator John Joel Joseph, one of the suspects involved in the assassination of Haitian President Jovenel Moise, a crime that has exacerbated the country’s sociopolitical crisis.
The detainee is a former Haitian opposition senator. He was found with others in a rural community where he lived anonymously on the island.
Jamaica Police Communications Unit Chief Superintendent Stephanie Lindsay said other people had been arrested along with Joseph and authorities were trying to determine who they were.
“For various reasons, we will no longer share information about Joseph’s arrest,” he told reporters.
Haitian President Jovenel Moise was assassinated on July 7 when hitmen invaded the presidential residence and shot him dead. The First Lady was injured but survived.
News of the former senator’s arrest comes after Haiti’s National Network for the Defense of Human Rights (RNDH) earlier this month denounced the lack of progress in the investigation into the murder of President Moise.
As foreign nationals were actively involved in the preparation and execution of the murder, the RNDH considered it important to collaborate with intelligence agencies from other countries who can help locate the perpetrators of the crime.
Former Colombian soldier Mario Antonio Palacios was another detainee, suspected of being linked to the murder. He faces two charges in the United States related to the crime and is being held in a prison in Miami.
Palacios testified before US authorities after he was arrested earlier this month during a stopover in Panama, from where he voluntarily traveled to the United States.
According to recently released legal documents, Palacios said he was hired to provide security and take part in an operation that was originally intended to capture Moise at the airport and put him on a plane, but on July 6 , he was informed that plans had changed to a murder.