Today, he is wanted for arms trafficking by the Haitian National Police. Despite a complaint filed against him after assaulting his wife, Vundla Sikhumbuzo continued to enjoy good relations with the Episcopal Church

Vundla Sikhumbuzo began his relationship with the Episcopal Church of Haiti in 2011. The Zimbabwean was appointed to the holy church as Director of Operations, a new position created to manage many programs and activities developed in response to the January 12, 2010 earthquake.

His main task was to manage the financial, administrative, and human resource activities of the diocese while providing overall management of operations, systems, and controls.

Vundla Sikhumbuzo holds an MBA in International Marketing and Management from the United States International University in Nairobi, Kenya. He is fluent in French, English, and Swahili.

The church’s former retired Bishop, Monseigneur Ogé Beauvoir, is aware of the administrative problems that existed in the church before he left. “I was fighting for discipline and good management of the church’s assets, including setting up an accounting system against fraud,” he said yesterday in a telephone interview with AyiboPost from the United States.

When a priest inappropriately sold church property, Bishop Beauvoir complained to his superiors, but the issue was short-lived. “I was a troublemaker, Ogé Beauvoir says. They even tried to kill me.”

In 2018, Vundla Sikhumbuzo will divorce his wife, a Chadian woman, Kassire Hawa Ohrgue, who reported having been the victim of an acid attack.

“I was assaulted in my bedroom by the father of my [three] children in complicity with my driver, says the lady in 2018 to TchadInfos. After being tied up and tortured, I had been sprayed with acid. After a 14-day hospitalization at Doctors Without Borders/médecins sans frontières (MSF), I was transferred to Memphis, Tennessee (USA) due to my deteriorating health.”

Kassire Hawa Ohrgue filed a complaint in Haiti as early as May 2017 and then in January 2018 against the perpetrator of her assault, Mr. Sikhumbuzo Vundla of Zimbabwean nationality, but no action was taken. 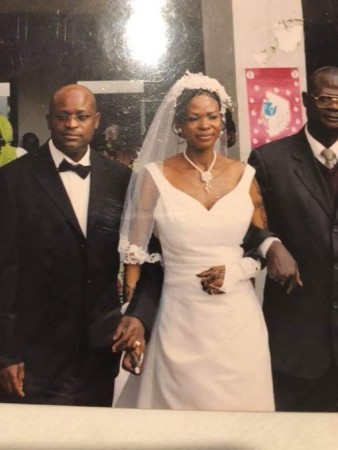 Vundla Sikhumbuzo is presented as a jealous man who never accepted his wife’s divorce request. He also had extramarital affairs.

In an open letter to the president and first lady of Chad in April 2018, Kassire Hawa Ohrgue wrote: “I am not asking for gold or money, but for your intervention to ensure justice is done. No light has been shed on the assault, I would just like equitable justice.”

A few months later, in September 2018, the Court of First Instance of Port-au-Prince granted the couple’s divorce.

Vundla Sikhumbuzo was removed from his position as the Head of Operations in Haiti by U.S. Episcopal authorities in 2018. It is unclear whether this decision was prompted by the acid attack. “He left his position far more corrupt than those he was supposed to come to get back on track,” said a source well positioned in the church.

The U.S. Episcopal Church’s decision did not sever the relationship between the church in Haiti and Vundla Sikhumbuzo. Instead of returning to the United States, he stayed in the country. According to information obtained by AyiboPost, he continues to use at least one of the materials owned by the Episcopal Church in Haiti.

In 2020, Vundla Sikhumbuzo was again hired by the Episcopal Church to help get a “big truck” through customs on behalf of the church in La Gonâve.

“The diocese of Haiti hired Vundla Sikhumbuzo to manage extremely complex negotiations to get the truck through customs and shipped from mainland Haiti to La Gonâve,” reads a 2021 post on the lagonavepateners.org page. The truck was purchased in the city of Keyser in the state of West Virginia, USA.

Vundla Sikhumbuzo did not stop there. A month and a half ago, he contacted retired former Monseigneur Ogé Beauvoir to use his “many contacts at customs” to help some containers destined for the church escape regulatory inspections. “I can’t do that, the government doesn’t do that anymore,” priest Ogé Beauvoir replied.

Since July 14, 2022, Haitian police authorities have been searching for Vundla Sikhumbuzo for his alleged involvement in the illegal trafficking of arms and ammunition after the discovery of twenty weapons of war, thousands of bullets, and a bundle of counterfeit American dollars in two containers destined for the Episcopal Church.

A total of four containers intended for the Episcopal Church are at the Port-au-Prince customs office. Search operations continued late in the afternoon of Friday, July 15, 2022 in the other two remaining suspected containers.

Vundla Sikhumbuzo did not respond to multiple calls from AyiboPost before the publication of this article. In a statement released Thursday, the Episcopal Church says it has “no orders for containers and has not taken any steps to clear containers through customs in Port-au-Prince.” The institution says it does not expect the arrival of “any goods from abroad for any of its diocesan institutions.”

Before joining the Diocese of Haiti, Vundla Sikhumbuzo worked in Chad, Iraq, and Kenya, among other places. He has over sixteen years of experience working with non-governmental organizations, including CARE International, World Concern International, and Food for the Hungry.

In his previous positions, he was responsible for public administration and finance, operations, planning, logistics, and human resources management. He has been based in Haiti since March 2011, and previously worked with the International Organization for Migration (IOM) and the United Nations Stabilization Mission in Haiti (MINUSTAH).

Are the “restavèk” really slaves? #HaitiBeat