John Quin reports on works by Project Art Works, Richard Bell, IkkibawiKrrr and others at the fifteenth edition of the long-running exhibition of contemporary art in Kassel, Germany 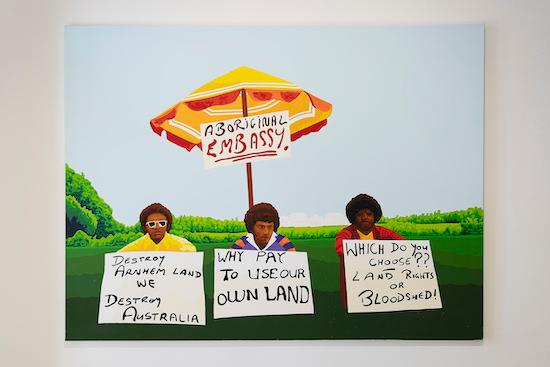 Richard Bell, Umbrella Embassy, 2022, installation view: Fridericianum, 14 June 2022. Photo: Nicolas Wefers
Every five years since 1955 the German city of Kassel holds Documenta, an enormous exhibition held in various venues throughout the conurbation. Documenta is a showcase for contemporary art with a stellar history and this is its fifteenth iteration. Key artists and key art movements have been consistently highlighted and/or introduced to the wider world at Kassel. Think Joseph Beuys and his 700 oak trees or Walter de Maria’s one kilometre-long brass rod imbedded in the earth: Land Art and minimalism and ecology intertwined. The 2017 show had nearly a million visitors. Documenta gives artists at least two years to conceive and refine their ideas – hence its high reputation for cutting edge projects.
Documenta 15 is curated by an Indonesian art collective called ruangrupa – the lower case ‘r’ is deliberate. There’s much utopian talk of sharing and trust, generosity and humour: this all summed up as ‘lumbung values’, a lumbung being a communal rice barn in rural Indonesia where farmers split the harvest surplus. Fine and dandy but Documenta 15 has already proven controversial. Accusations of anti-Semitism arose after a banner featuring Nazi symbols and Der Strürmer-style caricatures was shown, more of which below. This is Germany remember, sharing images of swastikas is an illegal act; Chancellor Olaf Scholz has ruled out a visit. So what’s he missing? Here are five highlights. Oh, and a guilt-ridden caveat to end with:
Richard Bell
The sign planted outside a makeshift construction is unequivocal: White Invaders You are Living on Stolen Land. Bell’s Tent Embassy (2013–ongoing) sits in the middle of the city’s main square, the Friedrichsplatz. Bell is an indigenous Australian showing his own work alongside contributions from the Digi Youth Arts organization based in Meanjin (Brisbane). Bell’s canvases are some of the few oil paintings on show at Documenta 15. These, such as Hand-outs Protest (2022) and Sol (2021), feature demos and activists with placards demanding land rights. Harold Thomas’ brilliant design for the Aboriginal flag, with its black and red bands and yellow sun, features strongly. There’s rare humour here too as with the acrylic on canvas How to Launch a Book (2022) that sees a guy chucking a volume into what appears to be the Parramatta River in Sydney.
Atis Rezistans 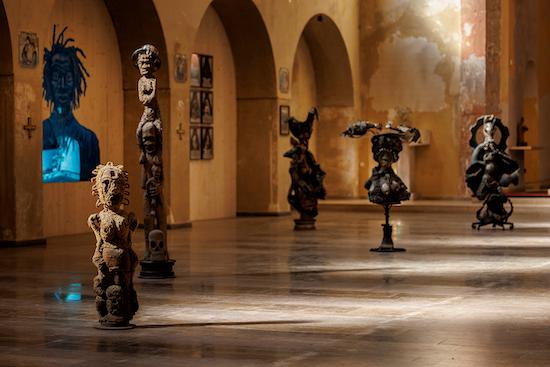 Documenta fifteen: AtisRezistans| Ghetto Biennale, Studio Verve Architects, Vivian Chan, Martina Vanin, The Floating Ghetto, 2022. Installation view, St Kunigundis, Kassel, 14 June 2022. Photo: Frank Sperling
This is a collective based in Port-au-Prince, Haiti, that majors in sculpture. Their work fills St. Kunigundis, a deconsecrated church, and thus there is a frisson of transgression, of blasphemy even. We’re talking voodoo, Baron Samedi, zombies…all that spooky headless chicken stuff. Skulls, real ones, are stuck onto metallic assemblages and look like disinterred Mad Max characters. Many appear male and have giant phallic protrusions, pipe-shaped objects. One wonders what the outraged students at Imperial would make of these given that they outdo (by some way) anything Anthony Gormley has made. There are glass bell jars that work as spells, each filled with all sorts of totemic gubbins: multi-coloured magical objects like fishing floaters and plastic bananas, synthetic earthworms and badminton birdies. Elsewhere there are amulets and talismans, a gumbo of gris-gris. The works are a celebration of Haitian street culture and spirit guardians in a land otherwise cursed by extreme poverty. I was reminded of Ian Thomson’s empathic classic Bonjour Blanc: A Journey Through Haiti’ (1992).
IkkibawiKrrr
Another collective, this time formed in Seoul, South Korea, as recently as 2021. Monument (2022) is a sandpit-like installation with model buildings and layers of red bauxite, grey phosphate, and black ash derived from a type of seaweed. All this is said to commemorate the deaths of Korean slave labourers and miners during WW2. Tropical Story (2022) is a two-channel video installation and a series of photographs that feature war remains following the Japanese occupation of Jeju, Micronesia, and Indonesia. There are old command posts, tunnel fortifications, and runways. You’re reminded of Paul Virilio’s volume Bunker Archaeology and the ruined Nazi fortifications on the Atlantic Wall. Here too is the infamous Suicide Cliff on Tinian Island in the Marianas where Japanese settlers killed themselves in 1944 rather than be captured by the Americans. Nature has got to work on the remnants of war, no matter how devastating its effect, and we see the jungle reclaiming the once disputed territory, a theme common to Cal Flyn’s excellent book Islands of Abandonment: Life in the Post-Human Landscape.
Taring Padi 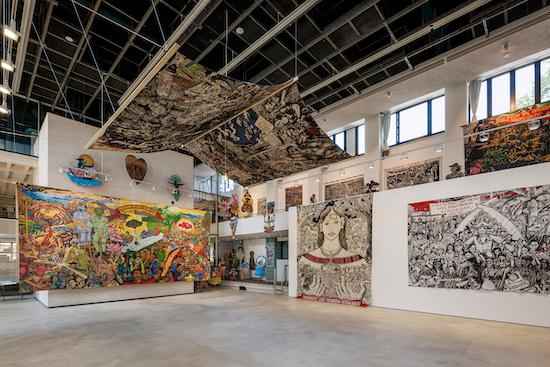 Documenta fifteen: Taring Padi, 2022, Bara Solidaritas: Sekarang Mereka, Besok Kita/The Flame of Solidarity: First they came for them, then they came for us, installation view, Hallenbad OSt, Kassel, 14 June 2022. Photo: Frank Sperling
Staying with Indonesia this collective was founded in 1998, a year of significant political protest in the country that culminated in the resignation of the dictator Suharto who had been in power for thirty-one years. Suharto is said to have embezzled somewhere between $15–30 billion. His invasion of East Timor is thought to have resulted in at least 100,000 deaths. Taring Padi make life-sized wayang kardus – cardboard puppets that are used in demonstrations. There are about a thousand of these displayed around the city. Here’s a woman armed with a tambourine wearing a green Sex Pistols T-shirt, a blue miniskirt, and a Batman belt. Pig-figures representing crony businessmen loom large as they spill suitcases full of cash. Taring Padi make enormous banners done in psychedelic colours stuffed with figures and detail. The crowds against the cronies are urged to agitate, educate, and organize. Aggressive greed is the target: how long before we see similar messaging here in the UK?
Indonesia is an enormous country. We’re reminded of this in another banner called Human Earth which is about discrimination against West Papuans. Papuan Lives Matter is the message, a land where 4.3 million residents have to abide by a 1969 referendum that was only offered to 1,000 or so representatives, handpicked by the Indonesian military. West Papua has the world’s largest gold mine but a quarter of its population are below the poverty line. There are reports of extrajudicial killings.
Taring Padi is the team referred to earlier that became notorious for their mural People’s Justice. There was a detail featuring SS runes on a character with fangs and sidelocks. The banner was removed, the collective apologized for the incident, and the chief executive of Documenta 15, Sabine Schormann, resigned.
Project Art Works
Founded in Hastings, East Sussex in 1997 by artists Kate Adams and Jonathan Cole. Here we see collaborative works made by more than sixty neurodiverse artists. This is one of the more joyful affairs at Documenta 15 and features more neo-psychedelia: Michelle Roberts’ Chitty Chitty Bang Bang (2016) is a zany rainbow-coloured drawing of creatures, crabs and tractors, trains and birds. There are strange men, all head with little stick limbs. It would make a great album cover. In cooperation with Frankfurt’s Atelier Goldstein there’s also work here by Hans Jörg Georgi who makes cardboard planes seen suspended from the ceiling. They look like goofy Short Sunderland flying boats and will appeal to old Airfix heads.
There’s a National Geographic feel to walking about the displays in Documenta 15: you can easily forget this is Germany – one minute you’re in Mali, the next New Zealand, yet another Lebanon or Vietnam. But anyone coming here expecting high technical values and work by virtuoso painters and sculptors is going to be disappointed. This show is not about the individual but the collective and activism. There are hundreds of banners and post-it notes and Venn diagrams. Brows may feel beaten by such a pummelling; there’s a lot of information to take in. The tone is occasionally hectoring, shouty even – This mess we’re in, it’s all your fault! If the old confessional booths had been open at the church featuring the Haitian art you’d maybe think of popping in and making a quick act of contrition.
Documenta 15 is often more earnest than Hemingway and Guevara playing golf as a four-ball with Ernie Els and Ernie, the guy who drove the fastest milk cart in the West. But its central message is sound. Documenta 15 screams out to us in the West: sort yourself out before it’s too late.
Share this article:

If you love what we do, you can help tQ to continue bringing you the best in cultural criticism and new music by joining one of our subscription tiers. As well as the unparalleled joy of keeping the publication alive, you’ll receive benefits including exclusive editorial, podcasts, and specially-commissioned music by some of our favourite artists. To find out more, click here.
Support tQ’s work by becoming a subscriber and enjoy the benefits of bonus essays, podcasts and exclusively-commissioned new music. To find out more, click here.
As a wholly independent publication, we rely entirely on our ad bookings to keep The Quietus going. Please whitelist our site in order to continue to access The Quietus.