COMMENTARY: A Historical Look Back – – Sounds of the Bay Area – Secular and the Sacred
California Legislative Black Caucus Hosts Leadership Program for High Schoolers
Celebrities, Politicians and a Host of Dignitaries Help Celebrate the AFRO’s 130th Anniversary
Respect for Marriage Act Passes in U.S. House with Help from Bay Area Representatives
COMMENTARY: The Power of the Vote
Marin County Offers Booklet to Parents to Prevent Preteen Substance Abuse
Your email address will not be published. Required fields are marked * 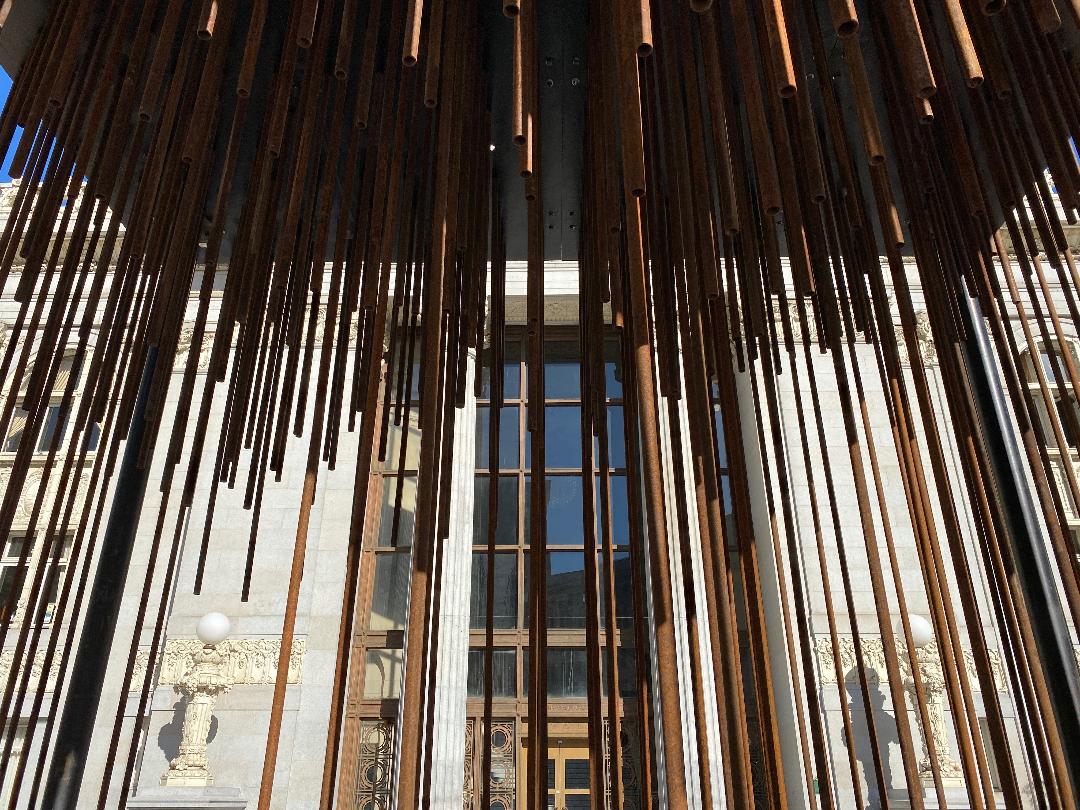 “It only took an instant for me to commit to this project,” said Randolph Belle, executive director of Support Oakland Artists. “In my over 30 years in Oakland as an artist and community developer, I’ve strived to utilize the arts to engage the public in thoughtful ways around important and timely topics. This project, this site, and these times are an unprecedented example of that.”
Visitors are encouraged to participate in a shared experience upon entering the pavilion. After holding their breath for as long as they can, evoking the common plea among victims of police killings, “I can’t breathe,” visitors then post a video reflection of their experience on social media using the hashtag #SocietysCage. This exercise is meant not only to build empathy but expand the installation’s impact online to allow anyone to participate in this shared exercise.
The pavilion was fabricated by Gronning Design + Manufacturing LLC in Washington, D.C., and Mejia Ironworks in Hyattsville, Maryland. A soundscape was commissioned from a pair of composers, Raney Antoine Jr. and Lovell “U-P” Cooper.
Comprised of four pieces, each eight minutes and 46 seconds in length in recognition of the time George Floyd suffered under the knee of police, they are themed to reflect each of the four institutional forces that sculpted the pavilion’s interior — mass incarceration, police terrorism, capital punishment and racist lynchings.
Early sponsors who have made the hosting of the Society’s Cage Oakland installation possible include the Akonadi Foundation, Tarbell Family Foundation, individual sponsors including principals from SmithGroup’s San Francisco office, corporate sponsorship including SmithGroup and many community partners including BIG Oakland.
Jeremy Crandall and Emax Exhibits were the Oakland Installation team.
A public unveiling is scheduled for Saturday, May 14, 2022, at 11 a.m., and a programmed event featuring local cultural artists is scheduled for Sunday, May 29, 2022, at 7 p.m. Participating individuals and organizations include original members of the Black Panther Party, the Black Cultural Zone, HipHopTV, and a host of local artists.
For more information, visit www.societyscage.com to find a link to the donation site. Additional donations will assist with programming and documentation related to the Oakland activation.
Randolph Belle is the executive director of Support Oakland Artists and RBA Creative studio in Oakland.

Onesimus. It is a name we don’t hear when we look at the history of vaccinations, but in the United States we owe a debt of gratitude to an African Slave named, Onesimus. In this video, voiced by writer and political activist, Baratunde Thurston, learn how Onesimus shared a traditional African inoculation technique that saved countless live from Smallpox and become the foundation for vaccine as we know them today, including the COVID Vaccine.

Many still seeking food, shelter a year after Haiti quake – The Washington Post