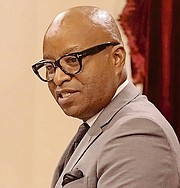 Senator Darren Henfield. (File photo)
By EARYEL BOWLEG
Tribune Staff Reporter
ebowleg@tribunemedia.net
AFTER the reported kidnapping of a local staff member of the Bahamas embassy in Haiti, former Foreign Affairs Minister Darren Henfield expressed confidence in the ministry, but stressed that there should be short notice to repatriate Bahamians home if things get to the point where the embassy staff determine they are unsafe.
His comments came after the Ministry of Foreign Affairs noted in a press release that it received communication from the embassy in Port-au-Prince advising of the apparent kidnapping of a member of its locally employed staff.
“According to information received from the family of the long-time employee at the embassy, the incident took place around 6am 1 September 2022 in the employee’s neighbourhood. The matter has been reported to the police in Haiti and is being investigated,” the release read.
“Our prayers are with the victim and family for a safe and speedy return. We will assist the authorities to the extent that we can. We are advised that the diplomatic staff generally are not at risk. However, additional security measures are being taken.
“The embassy will continue to monitor this situation along with the general security situation in the Port-au-Prince area, and advise the ministry accordingly on recommended courses of action to take,” officials said.
Mr Henfield told The Tribune yesterday that he was also assured that it was a local staff member, a Haitian national, who was kidnapped — not a Bahamian. He said it was not directly associated with anything with the embassy — describing it as “something external”. However, he added, that in any event, it is “disconcerting”.
“It is something to keep an eye on. That should concern us in The Bahamas because kidnappings and criminal enterprise are far too frequent and rampant in Haiti which I view personally as a failed state,” Mr Henfield said.
“It’s also our view in the opposition that the international community must make a more concerted effort to bring some kind of resolution to what’s going on in Haiti. The Bahamas alone cannot do it. There must be more urgency from the international community in response to the challenges that the Haitian people are facing because we feel the brunt of it, particularly the region feels it generally, and so for The Bahamas it’s an urgent matter in my view.”
Asked if it is time for the embassy to bring Bahamian workers home, the former minister answered: “While I was in office as foreign minister, we had occasion to bring Bahamian staff back to The Bahamas more than once when things got a little out of order in Haiti. Then it became a little violent and criminality ruled the day.
“I know the ministry is well disposed and capable of determining when people ought to return home, but I emphasise that there should be a short notice to move to repatriate Bahamians home if things get to that point where the embassy staff from The Bahamas in Haiti determined that they are unsafe. That’s normally the rule of thumb how I judged it – how we judged it in our administration.”
He argued that he did not believe that the Haitian authorities, whatever “semblance of that authority is left in place”, have the ability to control or deal with these criminal enterprises that seem to act with impunity. He again stressed that the international community must begin to look at Haiti with a little bit more urgency so “we can begin to look at bringing some resolution to the issues”.
As for if there was more the Davis administration could have done to protect the worker, Mr Henfield answered that is something he would not put at the “foot of the government”.
“These things happen all over the world. We rely mainly — when I was a part of the administration that was in office — on the information received from the embassy staff. They had a mission, the chief of mission, to see whether or not they felt safe or unsafe. And as soon as they signalled that they feel unsafe, they will be returned home.”
If their president Was killed no one else is safe to believe other wise makes no sense


The Guardian’s Live: Off the Record with presenter Zhivargo Laing is live on air playing his regular self-indulgent fallback of paperwork self that everyone but he knows damn well doesn’t exist redshirt fool – some the how’ he’s now attempting to justify his red party’s unexplained dumpin’ of $20+ million even better said than the rejected North Abaco Red MP Darren Henfield could’ve/might’ve said about 250 Domes said have been ordered built but only 25 ever completely completed sufficiently safe for an Hurricane Dorian left homeless persons to occupy ― Yes?

The Parkway is back, with a show of optimism for Haiti | Opinion