The spread of a cholera outbreak to an overcrowded Haitian prison, of Ebola virus to Uganda’s capital city of Kampala, and increased incidence of malaria, dengue, measles and cholera in flood-swamped Pakistan were among the long list of health emergencies needing urgent attention and investments – as compared to the trillions being invested right now in military conflicts around the world, said WHO’s Director General on Wednesday.
“We are deeply concerned about the outbreak of cholera in the capital Port au Prince and surrounding towns…The surveillance mechanism set up by the Haitian government with the support of WHO and other partners is operating under extremely difficult circumstances as the affected areas are very insecure and controlled by gangs,” said Tedros, speaking at a WHO press briefing Wednesday. “In Uganda, so far there are 54 confirmed and 20 probable cases, with 39 deaths [from Ebola virus]…
“In Pakistan,  I said last week that many more people than died in the floods could die from diseases in coming weeks… now there is a malaria outbreak in two districts while the incidence of cholera, dengue, measles and diphtheria is also increasing in flood affected areas. But so far international support has not been at a scale or speed needed.
“Trillions of dollars are being poured into fighting wars around the world.  We continue to ask international donors to invest in saving lives.”
In terms of the Haitian cholera outbreak – the threat that the deadly disease could spiral further out of control is high, both Tedros and other global health advocates have said, given the severe overcrowding of the country’s prisons, fuel shortages, and continued lawlessness.
Officially, only 18 deaths have been confirmed nationwide, along with 200+ hospitalizations, since last week’s announcement of the country’s first cholera deaths in three years, according to the Associated Press.
However under-reporting is likely given the civil insecurity that is prevailing.
“The surveillance mechanism set up by the Haitian government with the support of WHO and other partners is operating under extremely difficult circumstances,” Tedros said at the WHO press briefing. “The affected areas are very insecure and controlled by gangs, which makes it very difficult to collect samples and information of cases and deaths.
“In addition, fuel shortages are making it harder to help workers to get to work, causing health facilities to close and disrupting access to services for people who live in some of the most deprived communities,” he added.
Writing in The Nation, a group of global health experts said that as many as 80 people may have already died of the deadly disease in Haiti’s notoriously overcrowded National Penitentiary over the past week.
And hundreds more prisoners could die in coming days, warned the experts, led by Partners in Health’s Loune Viaud. They appealed to Haitian authorities to organize a mass prisoner release to ease overcrowding and to international donors for urgent investments in vaccines, medicines, clean water and sanitation.
A cholera outbreak is surging in a Haitian prison built for 800 people that now cages nearly 4,000. Without immediate care & releases, hundreds may soon die & an epidemic is likely to spread far beyond the prison at a time when Haiti can least afford it.https://t.co/inA5xhC55G
— Eric Reinhart (@_Eric_Reinhart) October 11, 2022

“WHO is working with the Ministry of Health and our partners to coordinate the response, including for surveillance, case management, water and sanitation, vaccination and community engagement. But to bring this outbreak under control, we need secure access to the affected areas,” he concluded.
A senior US official, Brian Nicols, was due to fly to Haiti Wednesday on an official visit, while a State Department spokesman said that Washington is also reviewing an urgent Haitian request for help, including intervention by foreign troops to quell the civil violence, the Associated Press reported.
My trip to Haiti comes at a crucial time as Haitians face a burgeoning cholera outbreak, gang blockade of ports, and fuel crisis, which are exacerbating the humanitarian and security situation. We remain committed to the health, safety, and security of the Haitian people. -BAN pic.twitter.com/xbFzXEDRq4
— Brian A. Nichols (@WHAAsstSecty) October 12, 2022

In 2010, some 10,000 people died in Haiti’s first cholera outbreak, the worst in recent global health history.  That outbreak was eventually traced to a sewage leak from a base of U.N. peacekeepers, who had been brought there to help after an earthquake earlier in the year.
Meanwhile, speaking from Uganda, WHO’s Health Emergencies expert Mike Ryan said he had “confidence” in the government handling of the Ebola outbreak – the largest seen there in years.
However, observers pointed to the fact that the spread of the deadly virus to a major city was a worrisome sign – following a similar pattern seen in the 2014-2016 West African outbreak that left over 11,000 people dead.
#Ebola spreading to a large city like #Kampala is not a good trajectory. Spread to urban areas in Liberia, Sierra Leone and Guinea in W. Africa was the catalyst for the expansion of that outbreak. Global support to stop this now is crucial. https://t.co/1xoa9FFxqV
— BK Titanji #IAmAScientist🇨🇲 (@Boghuma) October 11, 2022

The shift of infections to a major city like Kampala is particularly worrisome for public health experts since there is as yet no approved vaccine for the Sudan strain of the virus, the one to have struck Uganda this time.  In comparison, the recent outbreaks in neighboring Democratic Republic of Congo, caused by the Zaire Ebola virus strain, have been quickly squashed by ring vaccination efforts using new vaccines developed since 2016.
“As with Covid-19, the race is now on to find an effective vaccine: there are two potential candidates from GSK and Oxford, and clinical trials are being launched in the middle of this outbreak,” said global health expert Devi Sridhar, writing in The Guardian. 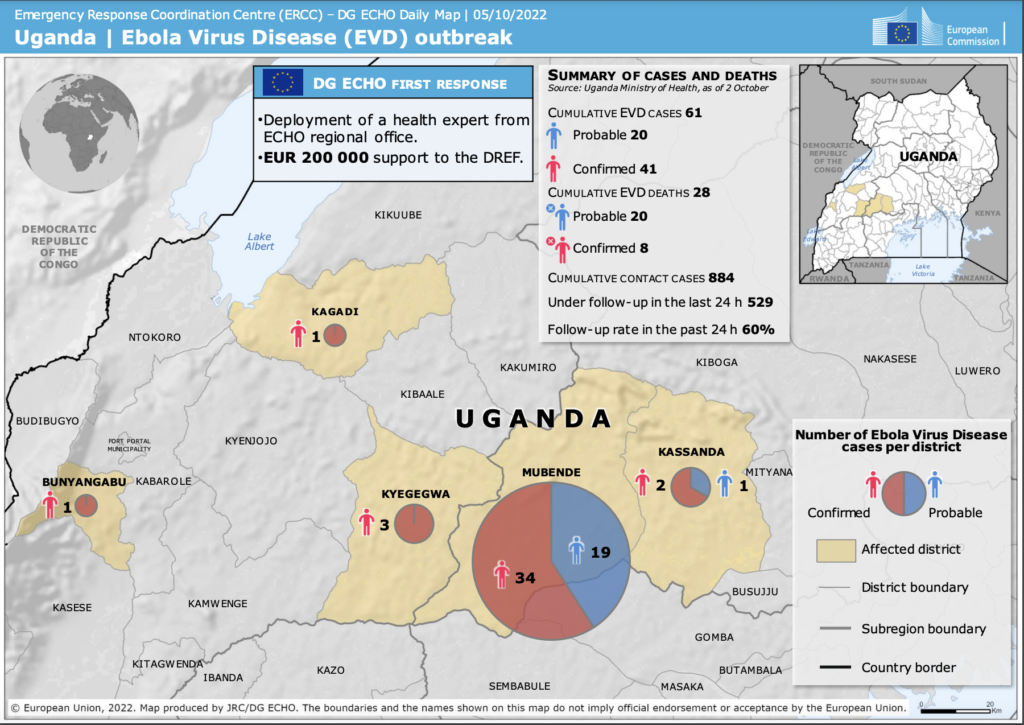 The area of southwestern Uganda, which has been the epicenter of the outbreak, is also a concern, located at a major trade crossroads.
“Cases were first detected in the Mubende district among people living around a goldmine. Gold traders are highly mobile, particularly along the busy highway that runs between Kampala, a densely populated and globally connected capital of 1.68 million people, and the Democratic Republic of the Congo to the west,” she noted.
With no vaccine tools available, public health workers have been forced to rely upon non-pharmaceutical measures, including isolation of infected patients, careful infection control, safe burials and the like.
On the positive side, the turnaround time for Ebola virus diagnosis has been sharply reduced from 48 to just 4-6 hours, said Ryan. Similarly, people with symptoms of Ebola are presenting themselves at clinics earlier  – but still not fast enough.
Ministers of health from Uganda and eight neighboring countires also held an emergency meeting Wednesday to agree on a series of joint control measures – to prevent the onward spread of the virus beyond Uganda’s borders – which is regarded as a high risk.
Today, the Government of #Uganda🇺🇬 in collaboration with @WHOAFRO & @AfricaCDC is hosting a Ministerial Meeting on #Ebola preparedness & readiness. ✅ pic.twitter.com/wpqsDd3kLt
— WHO African Region (@WHOAFRO) October 12, 2022