Sections
Extras
Connect With Us
Seven months ago, an accomplished chef and business owner was the target of racism when someone wrote the “N” word in white marker on the front window of his Caribbean restaurant in Nashua.
Chef Gerald Oriol, owner of Caribbean Breeze at 233 Main St., kept the incident quiet, preferring to let police conduct an investigation into the April 8, 2022, incident.
But when in October a man plastered all his windows with a sticky substance and police never updated him as to the outcomes of either investigation, Oriol decided to go public.
He said he has no idea who wrote the slur on his window or whether it was a disgruntled customer or someone who is racist. And he doesn’t know why someone would cloud his restaurant windows.
But Oriol said when he first took over the spot, formerly home to a well-known diner called Norton’s Classic Cafe, he felt there was resentment among some customers.
“Nobody said anything to me,” said Oriol, a native of Port-Au-Prince in Haiti. “I don’t take it personally.”
Oriol, who became a U.S. citizen “many, many years ago,” dreamed of having his own restaurant featuring the foods of the Caribbean islands.
He came to the U.S. in his early 20s, settling in Boston where he studied culinary arts and French cuisine at Bunker Hill Community College, earning his chef credentials. He worked at the Versailles Restaurant in Lexington, Mass., preparing French continental cuisine and is certified as a chef by the American Culinary Federation.
From those early beginnings, he moved to oversee regional dining operations for Sodexo, an international food services and facilities management company based in France.
In 2006, he was promoted to executive chef for the entire East Coast for Sodexo. Based in North Carolina, one of his clients was the U.S. Marines.
Three years later, he was transferred to Washington, D.C., where he was the sous chef for “showcase” accounts. From there, he returned to New England, assigned to Bentley University. 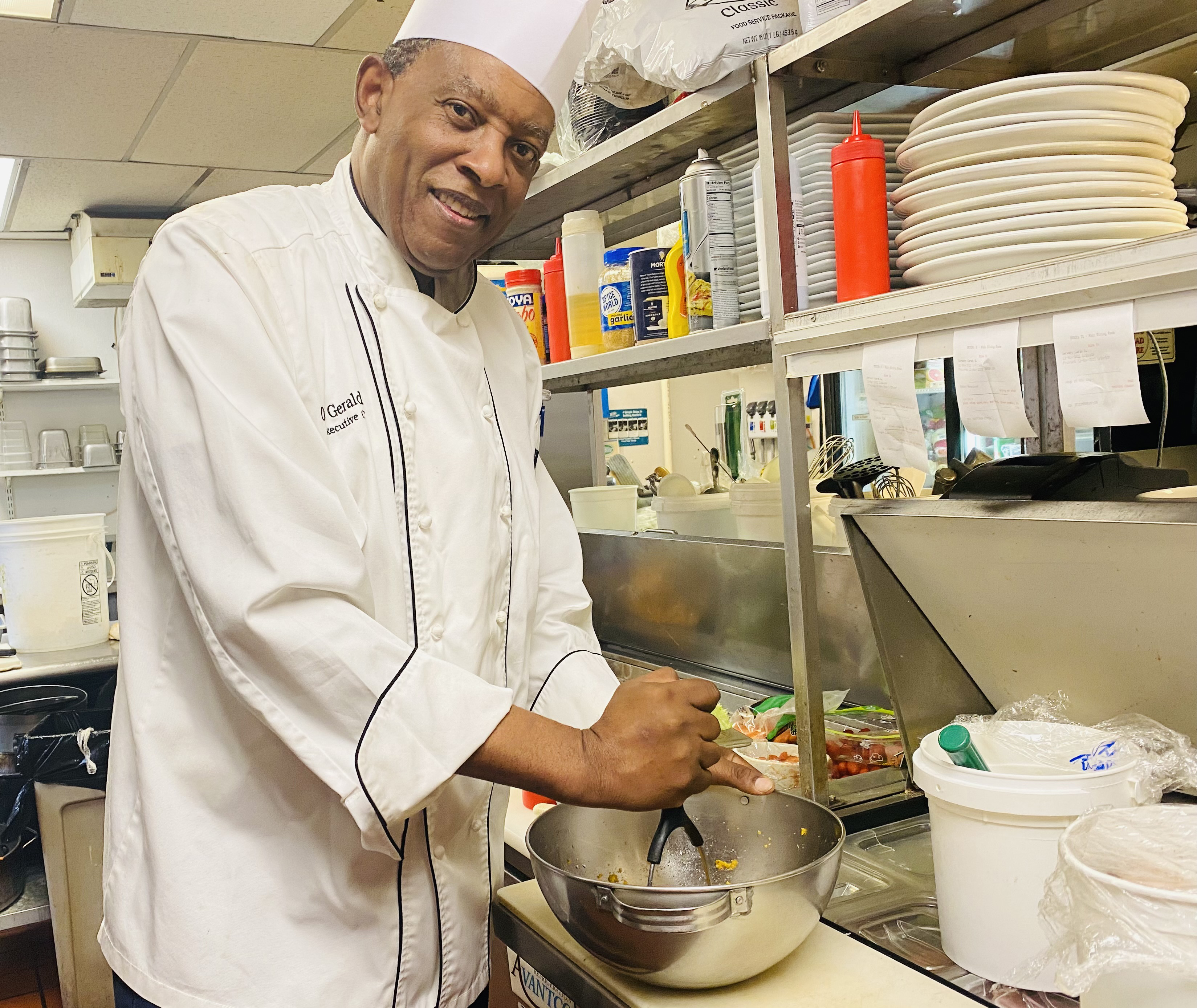 Chef Gerald Oriol prepares mofongo, a Puerto Rican dish of deepfried plantains mashed together with other ingredients. (Photo by Pat Grossmith)
‘Cooking is my passion’
Oriol was at Bentley when Covid-19 hit. College students across the country started attending classes remotely, and suddenly there was no need for food services. With more than 30 years as an executive chef, Oriol could easily have retired.
His passion, however, is cooking and his dream always was to have his own restaurant. His concept was to showcase the food of five Caribbean islands — Haiti, Jamaica, the Dominican Republic, Cuba and Puerto Rico — with their distinct flavors and spices, all in one restaurant.
“Cooking is my passion, and l have a great respect for the food as l focus on food safety, quality, consistency and food presentation,” he said. “The passion comes from my heart.”
Having lived in Nashua for seven years, from 2000 to 2007, Oriol decided to return to realize his dream.
“I left for 12 years to pursue my career around the United States,” he said. “I decided to come back to this great city to open the first Caribbean restaurant (featuring foods from multiple islands) in the country on Main Street in Nashua.”
On Nov. 19, 2021, Oriol opened Caribbean Breeze at 233 Main St. in the space that had been an anchor eatery at one of Nashua’s busy downtown corners.
Mindful there were customers who had frequented the site for up to four decades (even as the restaurant changed hands multiple times), Oriol decided to keep Norton’s breakfast and luncheon menus and the 1950sthemed sock hop booths, complete with speakers, in teal green and pink reminiscent of a 1950 Chevrolet Bel Air.
While Norton’s was open only for breakfast and lunch, Oriol added a dinner service featuring a full Caribbean menu: Jamaican oxtail and jerk chicken; Haitian Griot with pickle (pork shoulder marinated in citrus spice, braised and then fried); Cuban Ropa Vieja, sauteed garbanzo beans and shredded meat; Dominican chicharrones and yucca fritters; and, from Puerto Rico, Pernil and Sancocho, among other entrees and appetizers. The restaurant closes daily between lunch and dinner, from 1:30 to 4:30 p.m.
In the back he added a small bar so diners could have a cocktail along with a meal. The Caribbean offerings are also available for lunch.
Things were going well, Oriol said, until in early April he installed a new awning featuring a blue background, a setting sun, palm trees and the restaurant’s name “Caribbean Breeze” in white lettering. The awning featured all five of the islands’ flags.
Days later, on April 8, 2022, at about 8:30 p.m. as he was cleaning up, he looked over at the front window and noticed something was written on it. Taking a closer look, he discovered someone had used a white marker to write the “N” word on it. He called police. 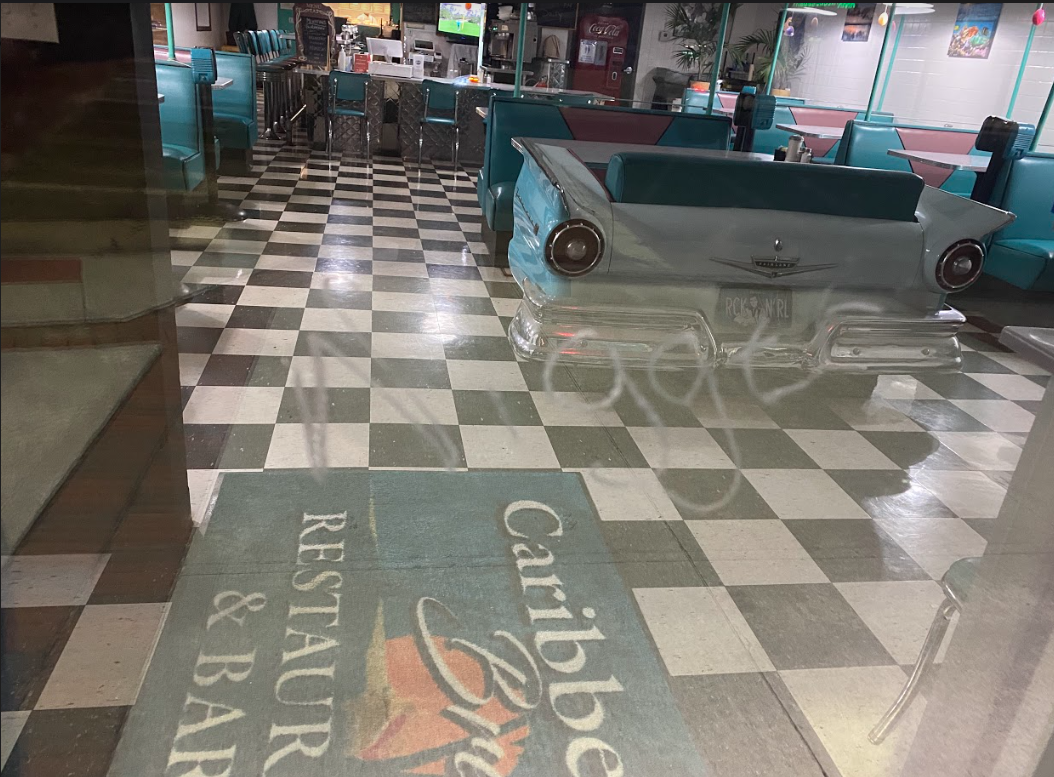 The ‘N word’ scrawled on the front window of Caribbean Breeze in Nashua. The restaurant was known for years as Norton’s Cafe and is now owned and operated by Gerald Oriol. (Courtesy photo)
‘Upsetting to all of us’
The Granite State News Collaborative obtained a copy of the police report. Before receiving it in mid-November, police had the officer who took the report, senior patrolman Cameron Douglas, get in touch with Oriol. Oriol said Douglas told him they closed the case because they could not find any footage of the incident. The officer told him he was sorry that Oriol had to go through what he did.
In the police report, Douglas said he observed the racist slur written on the outside of the window in “small print, however was able to rub the writing with a cloth and noticed the lettering begin to fade.”
Oriol said he would not describe the print as being small.
Oriol told the officer the slur was not on the window when he opened the restaurant that morning and that he only noticed it that night while cleaning. He told Douglas he had a security camera which probably overlooked the window, but he was unsure how to access it. Douglas said he would follow up with him to check on the status of the footage.
Five days later, on April 13, 2022, Douglas returned to check with Oriol about the security camera footage. Douglas reviewed the camera angles for the restaurant but was unable to find a camera that captured the image of the person who wrote the slur.
That was the extent of the investigation into the incident, according to Douglas’ report, and he requested the case be placed on file pending the discovery of any further information. The report does not indicate that he contacted any of the surrounding businesses to see if any of their security cameras recorded the culprit.
The incident was catalogued as criminal mischief and not designated a hate crime.
When Douglas stopped in at the restaurant in mid-November, Oriol asked him why he hadn’t checked with the nearby CVS, and Douglas told him the pharmacy’s cameras only oversee its parking lot.
Oriol said one of his customers told him Five Star Pizza, directly across from the Caribbean Breeze, has a camera directed at Main Street that records activity in front of his restaurant. Had police taken a look at their security footage, Oriol said whoever was responsible might have been identified.
The October incident, police said, involved a young man with mental health issues. Two other businesses — PRG Rugs and Citizens Bank — also had their windows clouded with a material at the same time.
Sy Mahfuz is a daily customer. He recently sold his business, PRG Rugs, to his son, marking it the fourth generation to own the Main Street business next door to City Hall and close to Caribbean Breeze. For four decades, he and some friends have met each morning for coffee and breakfast at the 233 Main St. business under its various ownerships. 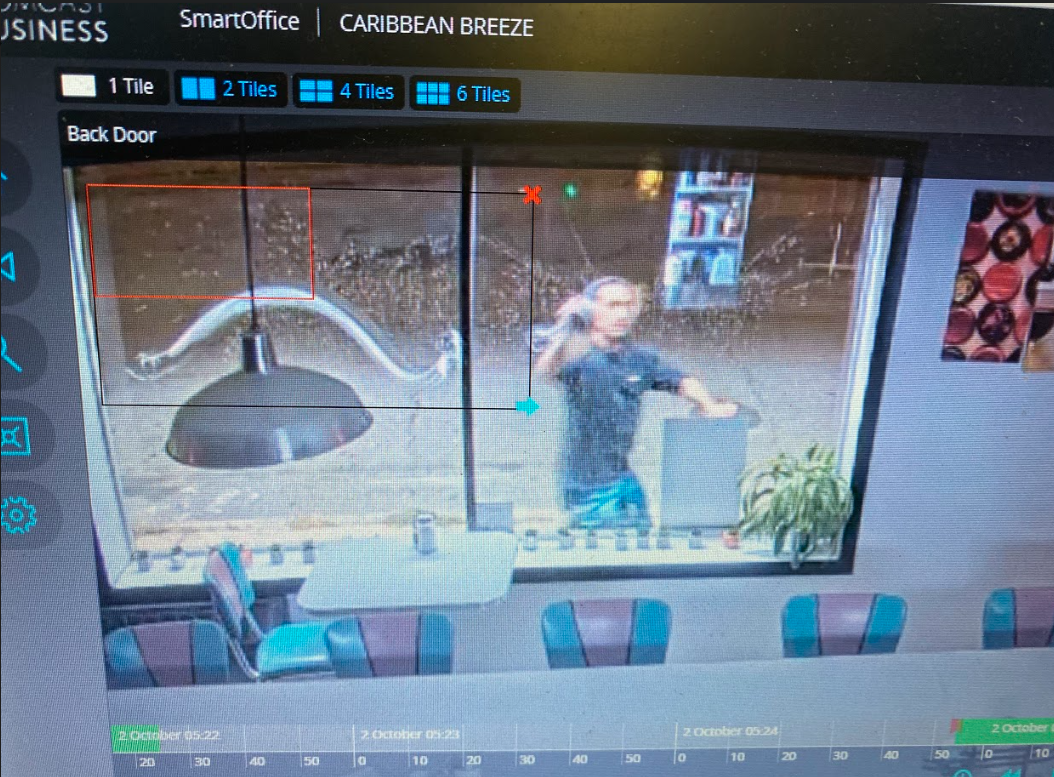 Restaurant security footage captured the image of someone vandalizing the windows at the Caribbean Breeze restaurant in October. (Courtesy photo)
Most days, he said, he and his two friends are at the restaurant before Oriol arrives.
Mahfuz remembers seeing the “N” word on the window and pointing it out to Oriol the morning after police were called.
“He was quite upset,” Mahfuz said. “It was offensive and it was shocking in the sense that in this day and age in our little town of Nashua I thought to myself, ‘How could this be?’ I was really shocked by it.”
Mahfuz said he watched as Oriol washed it off the window. “We all thought it was sort of a wax of some sort,” he said. “It did not come off easily.”
Mahfuz said the incident is upsetting to all of them.
“It’s upsetting to all of us because he is a wonderful man,” he said. “He came to Nashua with all of best intentions and his dreams, like any of us, that we can be successful in our own right. He’s an exceptional man with a really nice family, and we’re all disappointed that this happened and his business is floundering and none of us can figure out why, because it’s the same place, with the same breakfast and lunch menu.”
Oriol is the only Black owner of a business on Main Street.
And while Mahfuz is not an adventurous diner and has not tried the Caribbean food, he said his son has.
“He says Oriol’s food is phenomenal,” he said. “It gets high ratings.”
Mahfuz said the incident saddens and disappoints him.
“I think in this day and age whenever I read about an incident like this no matter what city it’s in, I think, ‘Are you kidding me in this day and age. Really?’ I’m just blown away this being something we are talking about.”
This article is being shared by partners in the Granite State News Collaborative. It was edited by Manchester Ink Link, a partner in the collaborative. For more information, visit collaborativenh.org.
© 2022 NH Business Review.