<!– Autor: –> Evangelical Focus
<!– Fuente: –> Christian Aid Ministries · <!– Lugar: –> PORT-AU-PRINCE · 23 NOVEMBER 2021 · 16:38 CET
After 37 days kidnapped, 2 of the 17 members of the missionary group abducted in Haiti have been released, informed this Sunday Christian Aid Ministries, the organisation that sent them.
In the statement, they “praise God”, and, although “only limited information can be provided”, they confirm that the missionaries are “in good spirits, and being cared for”.
“We cannot provide or confirm the names of those released, the reasons for their release, where they are from, or their current location”, explains Christian Aid Ministries, and asks “that those who have more specific information would safeguard that information”.
The Haitian National Police spokesman, Gary Desrosiers, also confirmed the liberation of the two hostages to Associated Press agency, while the FBI, which is working with Haitian authorities to recover the captives, declined to comment.

The mission organisation points out that “while we rejoice at this release, our hearts are with the fifteen people who are still being held, we continue to pray for them”.
They encourage Christians worldwide “to continue to pray for the full resolution of this situation. Continue to lift up the remaining hostages before the Lord“.
“God has given us much encouragement through the prayers and notes we have received. We, along with the family members of the hostages, treasure this support from believers around the world”, concludes the statement.

The missionaries, including six men, six women and five children, one of whom is eight months old, were kidnapped on 16 October by the 400 Mawozo gang. Their Haitian driver was also abducted, according to a local human rights organization.
Since then, the leader of the gang, has threatened to “put a bullet in their heads” if his demands are not met. Haitian authorities have said that the gang is demanding a $1 million ransom for each hostage.
The head of 400 Mawozo faces many charges, such as murder, kidnapping, auto theft and hijacking trucks. His extremist group was also blamed for kidnapping five priests and two nuns earlier this year,and is responsible for 80% of abductions in the country between June and September.

After the murder of Preswident Jouvenal Moïse in July, and the 7.2-magnitude earthquake that killed more than 2,200 people in August, Haiti struggles with rising gang-related violence and kidnappings, which have increased 300% between July and September, according to the Center for Analysis and Research in Human Rights. 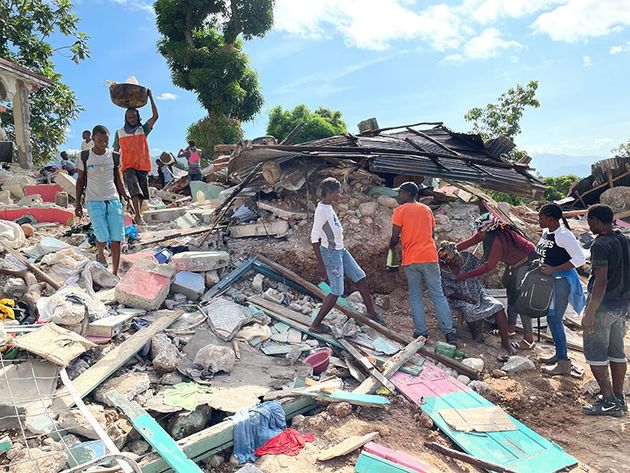 Furthermore, the US embassy in the country “urges U.S. citizens to carefully consider the risks of travelling to or remaining in Haiti in light of the current security situation and infrastructure challenges”.
“Widespread fuel shortages may limit essential services in an emergency. The U.S. Embassy is unlikely to be able to assist U.S. citizens in Haiti with departure if commercial options become unavailable”, they add in a statement.
Last Friday, Canada announced that it was withdrawing all but essential staff from its embassy.
Published in: Evangelical Focus – world – 2 of the 17 missionaries kidnapped in Haiti freed

All members of US missionary group freed in Haiti, police say – KY3